A growing number of Indian students have been choosing the US over other countries and the US embassy and consulates in India are operating additional hours to conduct student visa appointments and issue visa. 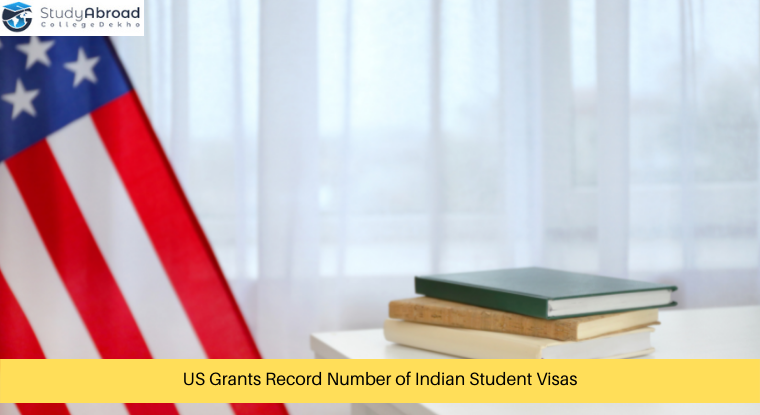 Latest Update (July 13, 2022) - The US Consulate is confident that the country will witness a record intake of Indian students in this academic year. Between January and May 14 of the current year, a total of 14,694 F1 visas or student visas were issued by the five US consulates across India. The figures for student visa approval have tripled from the year 2019.

New Delhi issued the highest number of visas which is 8,021, followed by Mumbai with 2,589 visas and Hyderabad which issued 1,947 visas.

A US Consulate spokesperson said that in spite of disruptions caused by the Covid-19 pandemic, the US embassy processed over 1.2 lakh F1 student visas in 2021. The slots were also not reduced. To tackle another record-breaking visa season US Consulate has opened additional visa appointments and extended programs to waiver visa interviews for students.

Also Read: India in Talks with US, UK, Canada, Other Countries on Student Visa Delays

The number of visa applications for Hyderabad is especially rising. Despite the severe pandemic situation, US Consulate General at Hyderabad was not closed for a day. They are gradually tip-toeing towards the pre-pandemic level and expect an increase in staff post shifting to a new building.

Get Help With Your US Visa Application!

Latest Update (June 8, 2022) -  Patricia Lacina, US Chargé d’Affaires, addressed the possibility of US Mission in India breaking the record of last year’s 62,000 student visa issuance to Indian students. The Embassy has booked 100,000 student visa appointments for this year.

Ms Lacina made this statement during the sixth annual Student Visa Day organised by the US Mission in India.

According to Don Heflin, Minister Counselor for Consular Affairs in India, the US Mission in India is conducting visa interviews with about 3,000 students every day. Last year, US Embassy issued a record-breaking number of 62,000 visas to Indian students.

Additionally, females comprised 40% of total Indian international students in US.

With the US embassy and consulates in India operating additional hours to conduct student visa appointments while other countries like Canada continue to be hit by delays, there has been a growing number of Indian students choosing the US as their study destination. In fact, the number i.e. 55,000 has hit an all-time high despite the pandemic and numerous travel restrictions.

According to the latest Open Doors Press Release on international education exchange, international students in the US contributed USD 44 billion to its economy and India remained the second-largest country of origin in the US.

In India, the US embassy and consulates resumed its visa services in July this year, after the second COVID-19 wave started to slow down in the country. They also made efforts to ensure the timely arrival of students for academic programs beginning in September.

Many students had to defer their admission by a year, because of the pandemic and travel restrictions both in the US and India. However, recently, the United States Mission in Delhi announced that it had already approved over 55,000 students and exchange visitors visas, higher than any other year before and that the number was increasing every day. This comes even after reports of delays in getting US visas approved for Fall 2021.

Other popular study destinations such as New Zealand and Australia continue to have their borders closed for international students. Several European Union countries also have not been clear about their vaccination requirements for students from India, making the situation all the more confusing for them.

According to Rajika Bhandari, New York-based international higher education expert, the US is seeing a pent-up demand  from the last few years when Indian students felt unwelcome due to the rigid immigration policies introduced by the Trump administration. This can also be attributed to students who deferred their offers of admission to this year.

Bhandari further said that international students are likely to feel safe on US campuses due to their clear plan for health and safety protocols amid the ongoing pandemic.

The US is an attractive destination due to it being home to the top-ranked universities with excellent reputation not just for high-quality tertiary education but also or career opportunities after graduation. Nearly 50% of the world's top 50 universities are in the US primarily because of their small class sizes, highly accredited professors, research proficiencies and advanced technology.

In addition, while many countries are struggling with their economic situation, the optional practical training (OPT) program in the US continues to allow international students to work in the US for one to three years in a job related to their program of study.

The US job market is showing signs of strong recovery despite the pandemic, which is a huge advantage for international students planning on working in the US post graduation.

US universities also excel at research, wherein students are exposed to some of the best minds, which broadens their career prospects.

Many US universities, considering the situation, also waived exams such as GRE/GMAT for graduate programs and SAT/ACT for undergraduate programs, which further lead to an increase in the number of applicants.

The vaccination drive by the US has certainly given a lot of confidence to Indian students to join US universities despite the pandemic.

Want to Apply to US Universities for the Next Intake?