Kshama SharmaPublished On: May 06, 2016
Government Science College of Durg is all set to start Choice Based Education System for the academic year of 2016-17. With this education system,

Government Science College of Durg is all set to start Choice Based Education System for the academic year of 2016-17.

With this education system, student from science stream can choose a subject to study from commerce or humanities tream and a student from humanities or commerce Stream can opt for a subject from science stream.
University Grant Commission UGC, released a notification on Choice Based Education System for the session of 2015-16 but because of some technical issues it didn't worked out. So, now, from this coming academic year, it will be in work.

Pandit Ravishankar University started this education system in the academic year 2015-16 and most of the students from science stream showed their interest in subjects like History and Economics. According to Academicians, students want to opt for those subjects which will help them in preparing for various competitive examinations.

Under National Higher Education Campaign, Durg Science College got a fund of Rs.2 Crore which will be invested in the infrastructure of the college. Under this campaign colleges will get funds for the development of the college.

Durg Science College also known as Govt.V.Y.T.PG. Autonomous College, established in 1958 at Hindi Bhawan, Durg.It was declared Autonomous College in 1989.It has been Accredited with Grade 'A' by NAAC, Bengaluru.Its the First college in Chhattisgarh State, declared by UGC New Delhi as " College with Potential for Excellence, Phase -III "
Durg science college is the only college in Pt. Ravishankar Shukla University ,Raipur included under "IMF " Scheme of UGC. 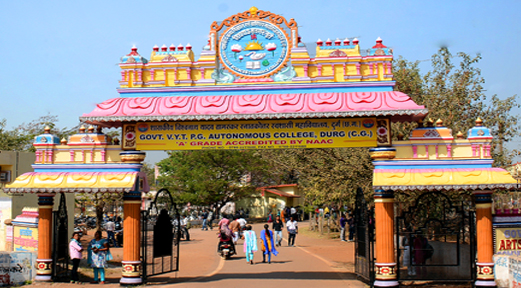 Is NIMS University good for BSc in Aviation?

The university combines advanced theoretical studies in the classroom with industrial training in the aviation industry to ensure that its students are ready to face the challenges posed by the aviation ...

What is the process of admission & fee structure per year for hostel admission.

The process of admission and fee structure of the hostel in any college is totally dependent on the college management. Apart from that, you can only apply to avail the hostel facility after you have taken admission in the college. You will be required to attach the receipt of payment of fees for that particular college in that particular year in your hostel application form.

If you need help with hostel facilities, you can talk to one of our academic counsellors who will inform you of all the colleges and guide you with the following: