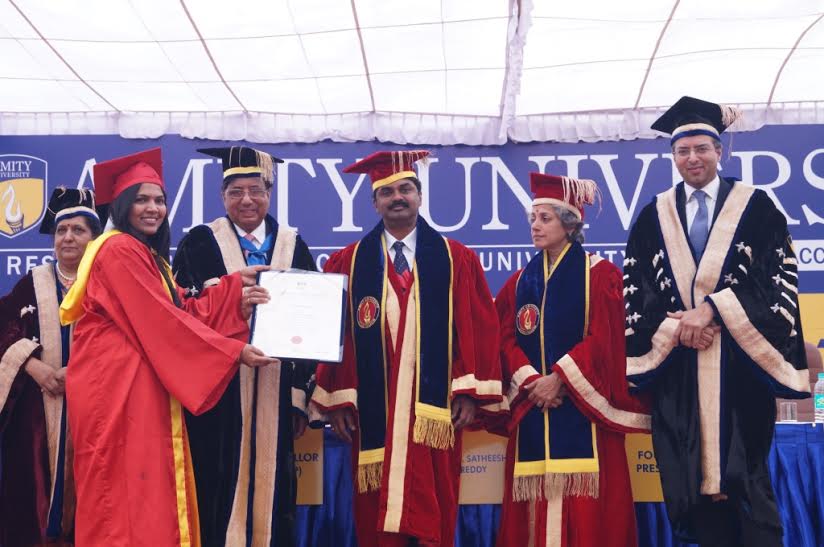 During the first day, a total of 3,500 Graduands from Science, Engineering & Technology, Life Sciences and Biotechnology Domains received their Degrees and Diplomas. Around 226 meritorious Graduands received Gold, Silver and Bronze Medals, Corporate Awards and Salvers.

The grandeur procession comprising of Trustees of the Board, Senior Members of the Management, Head of the Institutions, Departmental Heads and Senior Faculty members entered the Convocation Hall accompanied by the band of pipers humming the traditional celebration song, marking the commencement of the Grand event.

Blessing the graduands, Dr. Ashok K Chauhan- Founder President, Amity Group said that the alumni of Amity are distinguished and addressed them as Amity’s Amazing Achievers.

Welcoming the gathering, Dr. Balvinder Shukla- Vice Chancellor, Amity University Uttar Pradesh presented a brief report of the University in which she touched upon key achievements and initiatives that have been taken during the year 2014-2015 including new programmes launched in cutting edge technologies, breakthrough research work done by Scholars and Researchers, various research projects given to Amity by Department of Science and Technology and several ministries of Government, research papers presented by faculty members in National and International Conferences and Seminars and other milestones achieved by Amity University.

During his acceptance speech, Dr. G Satheesh Reddy expressed his gratitude to entire Amity fraternity for bestowing the honor on him.

During the second day of convocation, over 3000 Graduands from management domain will receive their Degrees and Diplomas.