Pranab SaikiaPublished On: July 27, 2016
the tTo two extremely passionate young cyclists from Mumbai have taken up a challenge to spread awareness about girl child education through their cycling expedition and also raise Rs. 50 lacs funds for girl child education

Sumeet Paringe (26) and Prisiliya Madan (22), the two extremely passionate young cyclists from Mumbai, have taken up a challenge to spread awareness about girl child education through their cycling expedition and also raise Rs. 50 lacs funds for their education.

There is much more to them. What is unique about them is that they are travelling on bamboo bikes designed and manufactured especially for them by Godrej. This is for the first time that a cyclist will ride on Bamboo bikes on this route. These two 'Cyclists for Change’ who started their ride from Kanyakumari reached the city on 21st July.

They have so far covered approximately 700 km and from past eight days have been riding. But they are not alone in this mission. Support is coming from Bangalore’s famous cycling groups like Bangalore Cyclists Group, Bangalore Cycling and Bangalore Cycling Club. On 23rd July, these cycling clubs rode with Sumeet and Prisiliya from Kasturba Road to Crescent Road. Then, the two cyclists went on to ride until the next halt. Both the cyclists are supposed to reach Khardung La by mid-September. Then they will travel across 11 states. 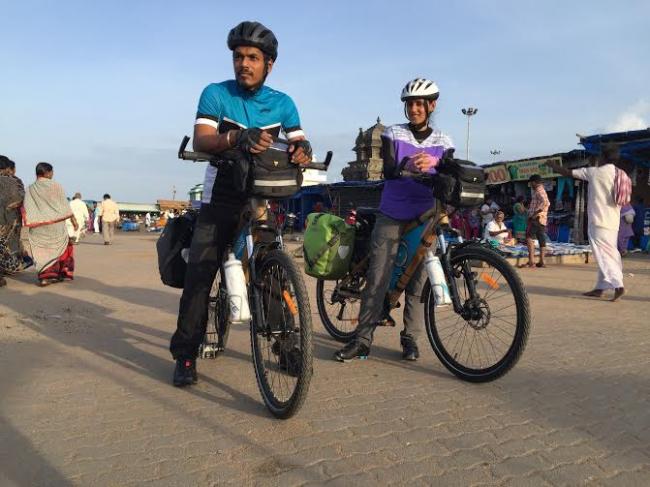 While lauding the role of education, Sumeet Paringe said that education is the key to empowering women and girls. It helps in bringing about social equality. When you educate a girl you educate a family. Prisiliya, who has just completed her Masters in Computer Science has always been encouraged by her parents to pursue her dreams. She believes every girl should be given the opportunity to enlighten through education.

How is the ride is unique?

The team hopes to support the education of 1500 girls at least through this mission.