The Prime Minister’s Special Scholarship Scheme for Jammu and Kashmir students, offered by the Indian Government, witnessed a huge success, as over 4,000 students enrolled in institutions across India. This has been a 74% increase from the previous year’s number of admissions under the scheme.

Under the Prime Minister’s Special Scholarship Scheme (PMSSS), it has been recorded that more than 4,000 students have taken admissions in the different educational institutions and universities located across India. This marks a 74% increase in the number of admissions taken from last years number.

In a tweet posted by the HRD Secretary, R Subramanyam, he stated that the Government saw a huge success in its scholarship scheme for J&K students for 2019. He added that there had been a 74% increase in the number of students from J&K who have taken admissions outside of their state. He gave AICTE, the accountability, for the increase due to the steps taken by them to streamline the processes. 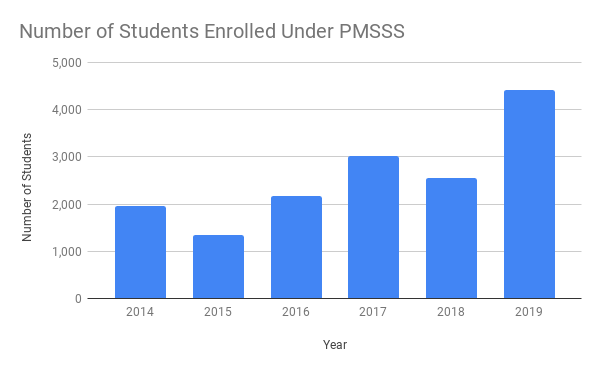 The Jammu and Kashmir region has been facing many restrictions in terms of communication and mobility after the Government of India had decided to remove its special status under Article 370, of the Constitution on 5th August 2019.

Keeping in mind the restrictions put in place in terms of mobility and communications, the administration of the state approached the government with a request to extend the deadline for the reporting of the PMSSS scholars to the different institutes. They stated that the students from the Valley may not be able to join as a result of the restrictions. The Supreme Court, in August, agreed to the request and extended the deadline from 15th August 2019 to 15th September 2019.

1 Upvotes
0 Downvotes
Read Next
Read Next

Does Noida Institute of Engineering and Technology offer B.Tech in Electrical Engineering course?

Yes, Noida Institute of Engineering and Technology offers B.Tech in Electrical Engineering course which is of a total of 4 year's duration. The candidates who have completed 10+2 in Science with a minimum aggregate of 50% are eligible for admission. There a total of 120 seats intake for B.Tech in Electrical Engineering. The annual course fee is INR 1.39 Lakh. The admission to the course is done on the basis of merit obtained in the 12th exam.

You can also go through the following article to learn more:

Is there any other scholarship in Bharath University for the students coming from other states?

When will be the OJEE result published?

The OJEE exam was conducted from October 12th to 19, 2020, and the results are expected to be released soon. The official dates for OJEE Result have not been out yet and you are advised to stay updated with College Dekho and the official website to get the dates as soon as they are out.