According to a new Medscape survey, physicians or doctors in the US are paid the most. They are the most satisfied with their pay and have the highest net worth in the country. Let us explore more about the doctor salary in USA! 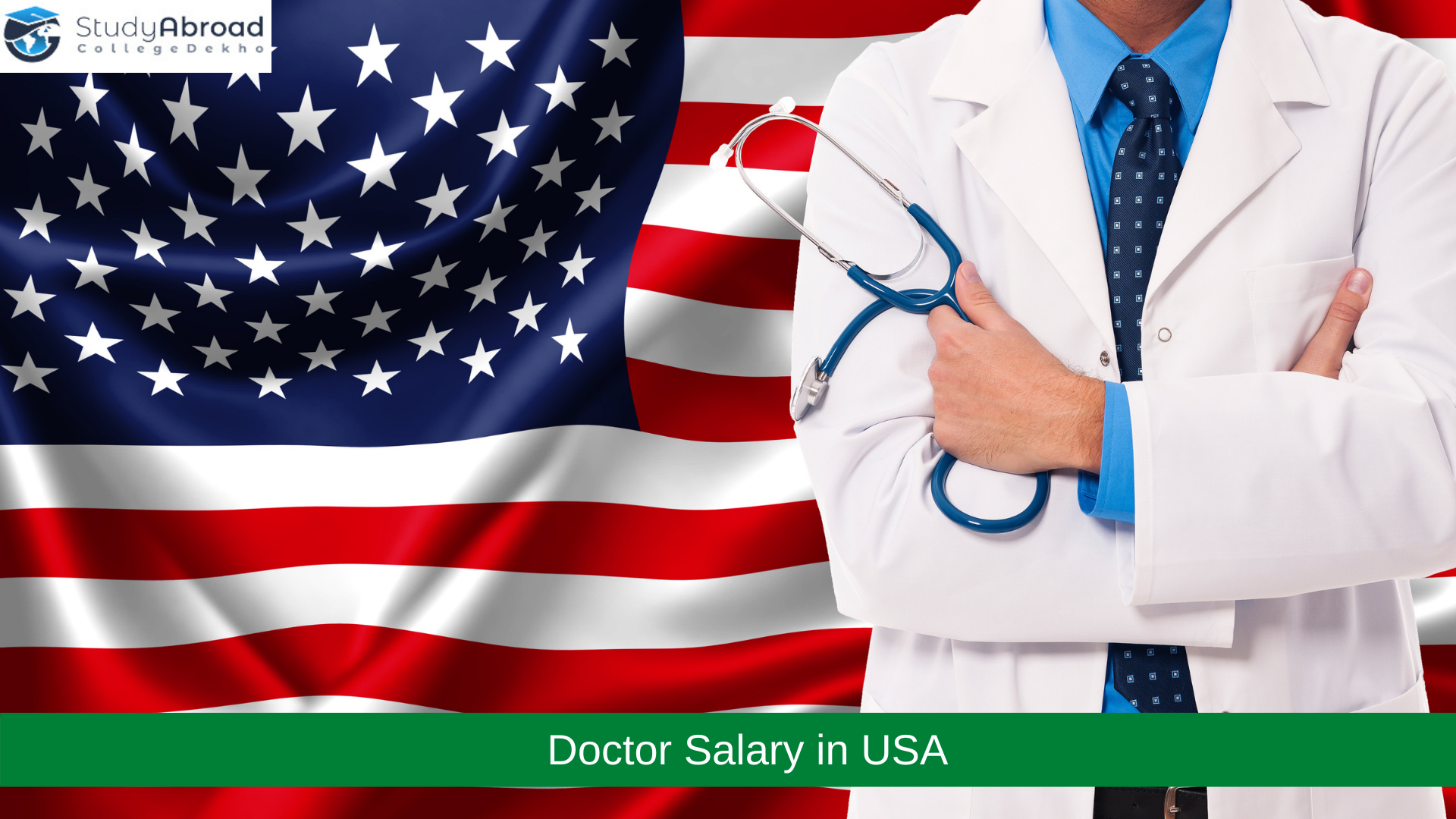 Doctor salary in USA: In the United States, becoming a doctor is a time-consuming and complex procedure that needs years of hard work, determination and patience. If you want to study and work in the medical field in the US, you should anticipate undergoing medical training for at least 7 years in addition to undergraduate studies.

Consider it as a large and risky investment plan with high future returns or rewards in terms of compensation and salaries.

According to the Medscape Physician Compensation Report, the average doctor salary in USA increased during and post the Covid-19 pandemic. While salaries have generally increased, the increase differs depending on a variety of criteria or factors such as specialization, gender, state, cities, and so on.

Hence, this article will help you know more about the doctor salary in USA which will surely motivate Indian aspirants to pursue a career in this field.

Choose the Right Programme to Study in USA!

What is the Average Doctor Salary in USA?

According to Glassdoor, the national average annual doctor income in the United States in 2022 is somewhere around USD 183,500.

It means that the average doctor salary in USA is roughly around INR 1.45 crore. The lowest national average annual pay was USD 126,470, while the highest was USD 208,000. (the highest average). Their typical yearly wages included base salaries as well as benefits such as transportation and accommodation.

Doctor Salary in USA Based on Speciality

When considering what profession to specialise in or whether to pursue a medical degree, the average doctor salary in USA might be a crucial consideration. When evaluating specialities, there are numerous aspects to consider, and knowing how much money you might make will help with financial planning, giving you a solid approximation of when you can expect to pay off your medical school loans.

According to the Medscape Physician Compensation Report, primary care physicians in the United States will make USD 260,000 on average in 2021, while specialists will earn USD 368,000.

The table tabulated below shows the average annual doctor salary in USA based on their specialities or specific job types:

Note: Cardiology and orthopaedics have been among the top five-earning specialities in MedScape's annual report for the previous five years. Paediatrics, Family Medicine, and Diabetes & Endocrinology were among the lowest-ranked specialities.

Doctors' average earnings are greater in metropolitan locations. Here is the list of the top 25 metro areas or cities in the US with the highest average annual compensation for doctors:

Know More About the Highest Paying Jobs in USA!

US Doctors Salary Trend in USA vs Other Countries

According to a new Medscape survey, doctors in USA are paid the most, are the most satisfied with their pay, and have the highest net worth. The findings also demonstrate that, regardless of country, female physicians earn significantly less than their male counterparts, in some cases by up to 75%.

Medscape's Worldwide Physician Compensation Report 2021 examined physician members from its US and international sites to learn about salaries, job satisfaction, everyday work issues, and the influence of Covid-19 on income. The paper examines data from the US, UK, Germany, France, Spain, Brazil, Mexico, and Italy from Medscape's Compensation Reports 2021.

Doctors in USA with the Highest Net Worth

The US has a far greater number of physicians who are happy with their pay (59%), followed by Germany, Brazil, and the UK. Oncologists, psychiatrists, plastic surgeons, and dermatologists in the United States were more likely to be satisfied with their pay. Physicians in Italy, Spain, and France are the most likely to be dissatisfied, with each reporting 75% or higher physician discontent.

In terms of net worth, US physicians or doctors are considerably ahead of those in other nations. The average physician salary in the US is somewhat more than USD 1.7 million. According to a Federal Reserve analysis, the average net worth for all households in the United States was USD 746,820, and the median net worth was USD 121,760.

In the United States, the UK, Spain, Germany, and Italy, the most prevalent debt for physicians is a mortgage on their principal residence. Credit card debt is the most common type of debt in Mexico (52%). In Brazil, childcare was the most frequently mentioned (35%). In France, the question was not posed. Major costs included car loan payments, medical expenses, graduate school tuition, and child education.

Gender Gap in the Average Doctor Salary in USA

A national gender wage disparity in medicine occurs, mirroring a national trend in all disciplines. The Doximity 2019 Physician Compensation Report examined doctor earnings in US metro areas, discovering that male physicians earned an average of USD 1.25 for every USD 1 earned by female physicians in 2018.

A locum, also known as a locum tenens, is a person who temporarily performs the tasks of another; the phrase is most commonly applied to physicians or clergy.

The impact of Covid-19 cases and deaths on physicians and other medical professionals was enormous, both personally and financially, as many offices closed for a while and physicians struggled to see patients.

Spain has had the greatest number of infected healthcare professionals in the globe – over 20%, far more than other European countries. This meant that a huge number of professionals were segregated or confined, resulting in an overburdening of care for practising physicians.

Overall, at least one-quarter (26%) of physicians worldwide had their income fall in 2020 compared to the previous year, with US physicians suffering the greatest loss (41%). Many doctors claimed that their pay remained constant.

Having said that, the United Kingdom has one of the highest percentages of physicians who witnessed an increase in pay (34%). Career growth, increments (pay increases based on years of service), and a nationwide salary hike were all mentioned by UK physicians. More than 75% of doctors in each country who reported a loss in income blamed it on the pandemic.

Because of Covid-19, telemedicine grew in popularity last year, and many physicians are grateful that it kept them earning money. Over one-third of doctors worldwide report utilizing telemedicine. Physicians and doctors in USA, Germany, Italy, and Mexico have yet to return to see the same number of patients per week as they did before Covid. Physicians in Brazil and France, on the other hand, appear to be seeing the same number of patients weekly as before the outbreak.

Now that you know that the job profile and that the doctor salary in USA is quite lucrative, it is critical to understand that the road to pursuing your dreams of studying medicine in the United States can be daunting for many aspirants. Hence, we recommend you speak with an expert to understand your chances before making a move.

Write to us at abroad@collegedekho.com and allow our experts to guide you in each step of making your dream come true!

Want to Study Medicine in the US?

How much does a US doctor earn per month?

What is the starting salary for a doctor in the USA?

The starting or entry-level salaries begin at USD 43,465 per year, with most experienced individuals or doctors earning up to USD 233,600 per year. The average medical doctor's salary is USD 183,429 per year or USD 87.26 per hour.

Are doctors rich in USA?

Why do US doctors get paid so much?

Despite a starting pay that is more than three times that of an engineer, speciality doctors only outearn engineers in lifetime earnings when they are 45 years old. Engineers have a better financial situation than even specialised physicians between the ages of 22 and 44. A physician earns USD 246,142 per year on average. Whereas the national average salary for an engineer in USA is USD 68,746 per year.

How many hours do doctors work in USA?

According to the Work/Life Profiles of Today's Physician, released last year by AMA Insurance, most doctors in USA work between 40 and 60 hours per week, but nearly one-quarter work between 61 and 80 hours per week. Approximately 20% of respondents aged 60 to 69 work fewer than 40 hours every week.