The pandemic has negatively affected many sectors, especially in the international education sector. The US intensive English programme saw a 50% decline in international student enrolment as a result of the external shock caused by COVID-19. 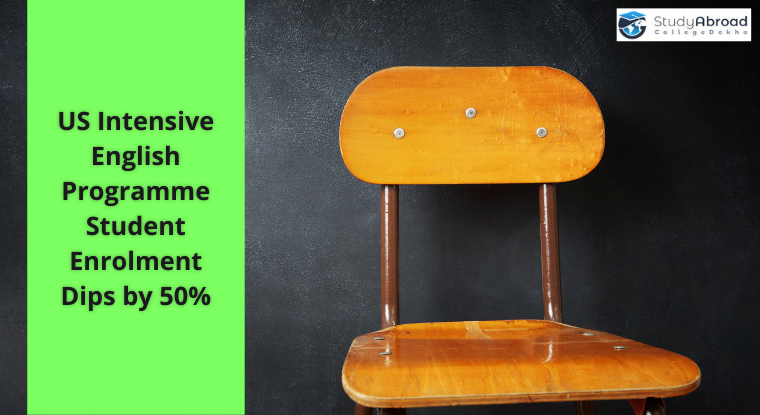 The COVID-19 pandemic has adversely affected the international education sector across countries. Data collected from an Open Doors Report revealed a 50% decline in international students attending the US intensive English programmes in 2020, as a result of the pandemic.

Julie Baer, an Institute of International Education research specialist, commented while speaking at the NAFSA 2021 Annual Conference “the external shock of COVID-19… resulted in the 50% decline in international students enrolling for the US intensive English Programmes.”

The IIE had released the Open Doors Report, with the help taken from the US Department of State’s Bureau of Educational and Cultural Affairs. The report consisted of data collected from four individual surveys, which includes the Intensive English Programme survey.

Earlier this months, new data had been released from the IEP survey, which also depicted the sharp decline. Among the US Intensive English programme students, 24.5% of the total 37,365 students in 2020 were comprised of students from China. This was 47% less than the previous year.

The English UK member schools had revealed an overall fall of 83.6%, while Languages Canada saw a decline of 56%. English Australia also saw a sharp decline of 43.3% in new enrolments, since the pandemic wreaked havoc across the globe.

Baer added that there is a stark difference in the definitions of how the students were counted every year. However, the external shock of COVID-19 was seen as the major reason for the significant declines in the English Language training markets globally.

As a result of the pandemic forcing changes in our ways of life, researchers also changed the definitions that have been used. Included in the changes, the students who had enrolled in the US Intensive English Language programmes but were attending remotely were also included.

The Institute of International Education also found that 90% of the respondents revealed adverse impacts of COVID-19, specifically on programmes. As per the data collected, a third of the programmes saw budget cuts, staff layoffs and furloughs as well as combining classroom levels.

Baer also pointed out that the intensive English programmes in the US have proven to be resilient and have adapted to the pandemic. She highlighted that 93% indicated that the pandemic resulted in innovations as well as investments within the programmes, while 80% saw an increase in virtual recruitment and outreach.

During her statements, Baer added that such significant fluctuations have been witnessed over a period of 40 years, depicting growth and decline as well. For instance, in the late 1990s, an increase in IEP enrolments was witnessed, however, post-September 11, a decline was witnessed. The numbers increased after the 2010s as a result of the Saudi Arabian government scholarship programme.

Also Read: 67% of Indian Students Want to Study in the US, Followed by the UK and France: Study

Recently, the decline had been witnessed since 2016, with changes in the government scholarship programmes, increasing global competition, the introduction of edtech tools that aid in language training as well as the growing capacity of the home countries in training the students in the English language.

The Institute of International Education also revealed that the IEP enrolment dipped by 4%, which was a small decline, which was almost 3,000 students, thus, also indicating a stabilisation of the US IEP sector.