What Do Board Toppers Prefer for Higher Studies? India or Abroad?

Today, most of the toppers live overseas. A recent investigation highlights where the Indian board toppers are and why they prefer moving overseas to stay back in their home country for higher education. 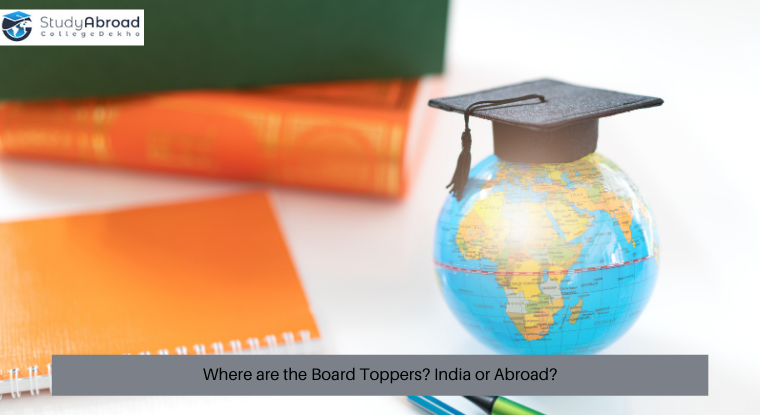 From leading up to becoming a cancer physician in New York or a professor at Harvard to working for Google, national school board toppers have been representing India on several fronts across the world. The 20-year data pulled for 1996 to 2015 points out that most of the toppers live overseas today, after having studied in various popular study destinations.

Of the total of 8 board toppers, 40 chose to stay back in their home country (India) whereas 34 went to the United States, 3 each in Canada and Singapore, 2 in the United Kingdom and 1 each in UAE, Bangladesh, China and Australia.

The following is based on an investigation conducted by an Indian newspaper to track down the Class 10 and 12 toppers between 1996 and 2015. Let us dive right in!

Find out what degrees or fields of study were opted by board toppers within the 20-year period: 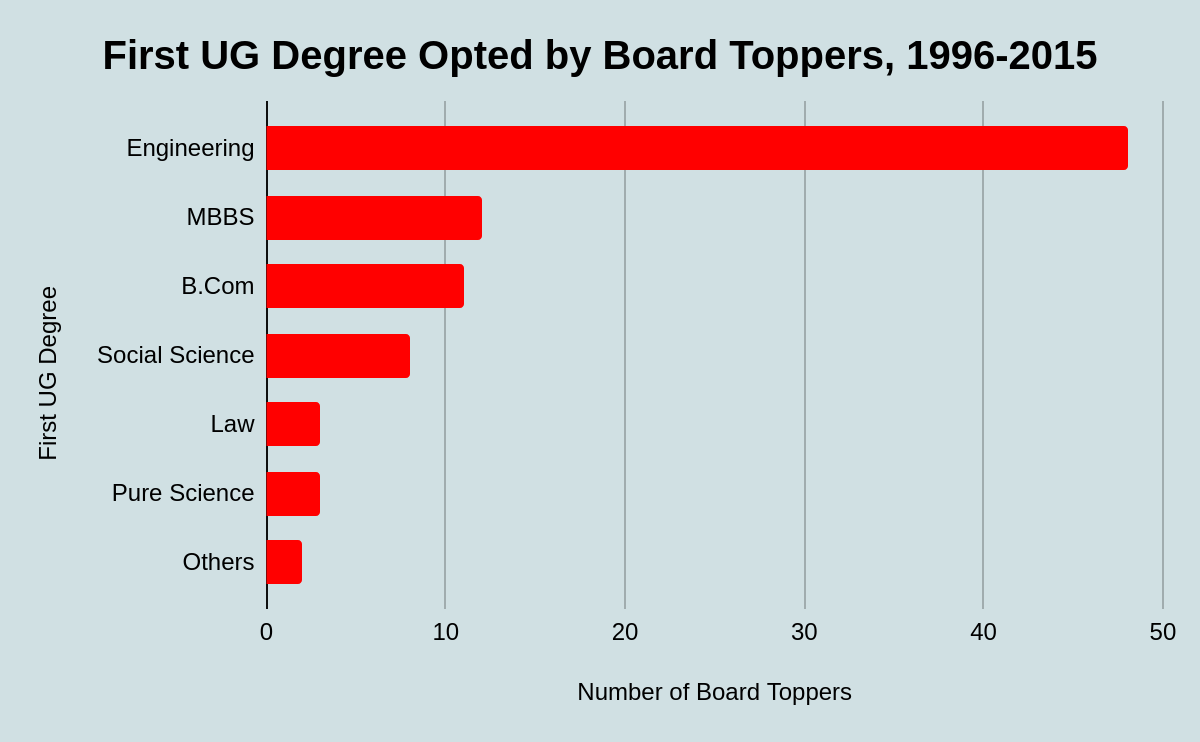 Over 50% of the toppers chose engineering as their undergraduate degree and only 12 did medicine. Among those who studied engineering, 6 out of 10 did the same at an IIT.

With the Indian Institutes of Technology (IITs) as their first choice, most Board toppers in India take up science and technology. Biswanath Panda, from Little Flower School, Jamshedpur is now Google’s senior director of engineering in San Francisco. Google, unlike any other company in the world, is home to 11 toppers, as of now.

Most of these meritorious students hail from Tier 2 and Tier 3 cities, who apart from engineering, went abroad to study MBBS, B.Com, Social Science, Law, Pure Science, among others.

Also found in the investigation was that of those employed abroad, most work in tech, followed by medicine and finance. If we analyse the toppers based on their gender, 49 boys and 25 girls opted for Science stream whereas2 boys and 10 girls took up Commerce.

When asked what the primary reason was for Board toppers to move out of India, most of them answered higher education. More than 70% of those who left the country went to different countries to pursue undergraduate or postgraduate studies, while only a few went to find a job.

28-year-old Janaki Seth went to the States for a PhD in Physics at the University of California, Los Angeles after having aced the 10th standard ICSE exam in 2008. Now a postdoctoral scholar at the University of Pennsylvania, she said that she chose to study abroad because scientific research in India was not so well-funded six to seven years ago. On the other hand, the US had more to offer, be it in terms of work or up-gradation of technology.

Somnath Bose, who left the country in 2008 to get training in critical care after doing MBBS and an MD in India, is now an assistant professor at Harvard Medical School. He is also a staff anesthesiologist at Beth Israel Deaconess Medical Centre, the school’s teaching hospital. Again, when asked why he left India, he replied that the US has better clinical training pathways along with affordable opportunities to combine clinical work with a focus on research.

Despite the fact that the majority of the students were interested in Engineering, the same was not the driving force behind their decision to study abroad.

A few have also confessed that they regret doing their undergraduate degree in Engineering. They wish that they had adequate guidance and career counselling during that time to get a better idea of the same.

Lekshmi Vaidyeswaran, who aced the Class 10 CBSE exam in 2007 and is now working as a senior product manager at ICICI Prudential Life Insurance in India, had done BTech from the College of Engineering, Thiruvananthapuram. She said that her family wanted her to take up Commerce but she, however, went ahead in Engineering as Commerce was seen as only an alternative. Had she taken up Commerce, she would have tried to become a Chartered Accountant, she added.

As commonly pursued as the best choice for toppers, many end up going for engineering and later on regret. Same happened with Sundaresh Nageswaran, a CBSE Class 10 exam topper in 2004 started studying Mechanical Engineering at IIT Roorkee but moved out to other fields after he found out that he was not interested in the field.

Another ISC Class 12 topper moved overseas to pursue an MBA from Harvard Business School after completing his BTech in Mechanical Engineering from IIT Kanpur. He is now a senior product manager at Amazon in Seattle. He said that better awareness on the significance of an undergraduate degree in broadening his career horizons would have had a huge impact on his decision to study mechanical engineering.

How Many Toppers Live or Work Abroad?

Toppers between the age group of 21 and 42 years are in foreign countries, a few of them pursuing higher education and a majority of them employed at reputed companies. Although the US continues to be the most favoured study and work destination, many prefer countries such as the UK, Singapore, Bangladesh, the UAE, Canada, Australia and China.

Most toppers who stayed back or came back to India after completing their higher education have chosen a career in finance, followed by tech, consulting and business.

For more information or assistance, please write to us at abroad@collegedekho.com.

Stay tuned for the latest news and articles on foreign education.