With growing concerns on climate change and sustainable development, the global higher education ranking system Quacquerelli Symonds has introduced an additional criterion under their advanced criterion which will assess the environmental impact and sustainability of various universities across the globe. 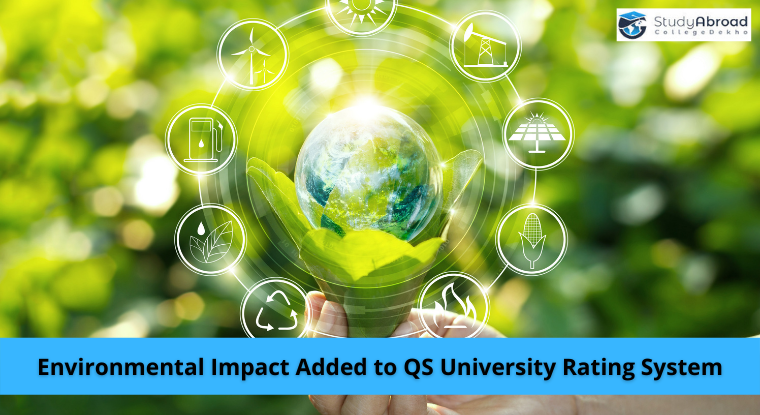 As the concerns on climate change and sustainable development grow among students around the world, the Global Higher Education Ranking institution Quacqurelly Symonds has announced a new category within the university rating system, that evaluates a universities’ environmental impact.

As per the latest announcement, the QS Stars University rating system will integrate the new environment impact rating under advanced criterion, which is one of three major criteria, i.e. Core Criterion, Specialist Criterion and Advanced Criterion.

The move had been made by the institution to address the results of a survey that revealed that 94% of international students suggested that universities “should do more to be environmentally sustainable”.

According to media reports, the new category is aimed at evaluating the policy aspects including sustainable procurement, investment, funding and donations, among others. Additionally, the criterion will also analyse the individual staff members along with the higher education institution’s climate action plan.

Further, the criterion will also focus on the operational impact on the environment which would assess the consumption of the institutions such as water consumption along with its carbon footprint.

Leigh Kamolins, Head of Evaluation at QS, highlighted the importance of the new parameter for institutions around the world, further adding that universities are pivotal in satisfying social changes like environmental impact, climate change and sustainability.

As a result of QS’s survey, Gen Z’s worries about climate change led to the institution adding the new rating in the rating system. According to the survey, around 76% of pointed to climate change as “one of their major societal concerns”, while 37% of the students ranked the highest among other options.

Ben Sowter, Research Director at QS, stated that the parameter had been introduced to the QS Stars Rating system as a response to higher education institutions keen on measuring their environmental impact to an international standard while also meeting the requirements of the millions of students that engage with the institution.

He added that a large number of universities have either already aligned themselves or are in the process of aligning themselves to the Environmental, Social and Governance, or ESG, criteria, thus satisfying students’ stances on environmental sustainability as well.

Will Your Application Meet Your Dream University's Requirements?

In her statement, Leigh Kamolins also highlighted that QS is dedicated to highlighting those universities who have been embracing sustainability, addressing them from the perspective of research, education and operations.

The criterion has also been designed to analyse the research aspects of the university that include the steps taken to meet the sustainable development goals of the United Nations. Moreover, the student organisations, outreach and public education at the institutions will also be assessed.