As the US aims to climb back up as the most preferred destination for study abroad, another announcement regarding student visa approval has been made. New guidance to the consular officers has been made to make it easier for international students to receive their visas. 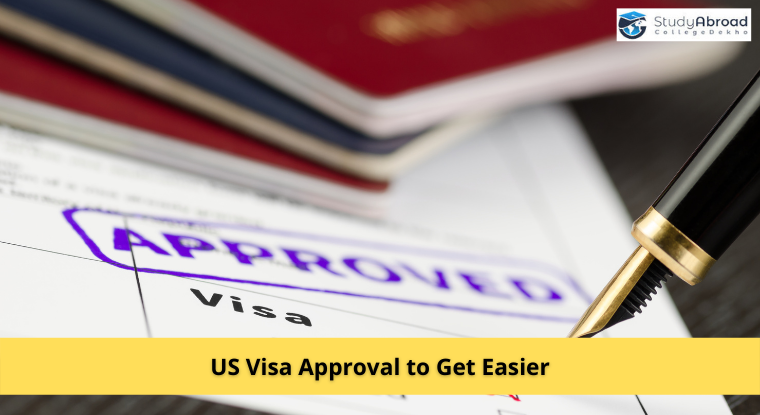 The US State Department has announced updated guidance to consular officers that is aimed at easing the process for international students to get their visas, as reported by Forbes. Before the new administration took over the Oval Office, officials from US universities raised complaints about students being denied visas after being misjudged with “immigrant intent” at US consulates.

Berry Appleman and Leiden’s Lynden Melmed, commented that the move is “just common sense”. He added that while international students should show intent to depart from the country, the US consular officers should not make assumptions over the possibilities of the applicant’s future.

As per media reports, several groups that have advocated for international education were satisfied with the move. Jill Allen Murray, Deputy Executive Director of public policy at NAFSA commented that consular officers should be able to consider the “inherent difference” between a “young F-1 visa applicant and more established short-term visa applicant”.

Also Read: Are Booster Shots Required to Study at US Colleges?

Jill added that NAFSA had laid down some key recommendations to the Department of State, which saw the restoration of the “helpful distinctions to the residence abroad requirement for F visa holders”. With the help of the new guidance, F-1 visa applicants will no longer be “penalised for not having the ties of property, employment and continuity of life”, which a short-term visa applicant would be expected to and capable of having.

The executive director of the Presidents’ Alliance on Higher Education and Immigration, Miriam Feldblum also displayed her agreement with the move, highlighting the Presidents’ Alliance’s stance on the change. She congratulated the Biden administration on taking the step and facilitating in “reinvigorating the international student mobility”.

According to the new guidance, “the context of the residence abroad requirement for student visas inherently differs from the context for B visitor visas or short-term visas”. Additionally, the statute outlines that the inherent natural conditions and circumstances of being a student do not disqualify a student from receiving their visa. As per media reports, a student not possessing any ties of property, employment or continuity of life is natural and common, since most students would commonly be single, unemployed and without property, often at a stage where they are deciding what to do with their lives.

The guidance also points out that the adjudication for a student visa becomes more complex since students need more time to complete their studies, compared to other international travellers. Therefore, judging a student’s present intentions, rather than what may happen in the future on completion of their programmes, should be considered when adjudicating an applicant.

Also Read: Harvard and Several Other US Colleges Return to Online Classes

Applying for a US Student Visa?

Get Your Applications Reviewed by Us!

Further, US consular officers should be satisfied with the applicant’s present intent, i.e. the intent at the time of applying for a visa, of leaving the US on completion of their studies. And moreover, understand that the fact that the intent is subject to, rather likely to change should not become a reason for denying a student their visa. Additionally, the intent to leave does refer to students required to return to their home country, instead it refers to students leaving the US on completion of their programmes.

The policy change comes at a time when US universities raised concerns over international students losing interest in applying to the universities due to the restrictive immigration and visa laws.