The UCAS figures revealed, there were a total of 60,130 applications for nursing courses by the main January 29 deadline this year, resulting in a 32% increase from last year. Clare Marchant, UCAS Chief Executive said the major reason for the rise are last year's inspiring stories from the wards. 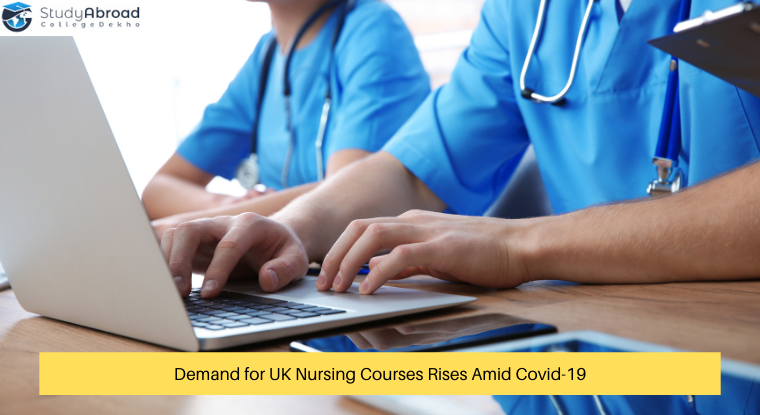 The number of students applying for nursing courses in the UK has surged by 32% according to statistics released by the university admissions service. The UK government said it will bring the country one step closer to adding 50,000 more nurses to the National Health Service (NHS) by 2025.

Clare Marchant, UCAS Chief Executive said the major reason for the rise is last year's inspiring stories from the wards.

There were a total of 60,130 applications for nursing courses by the main January 29 deadline this year, the UCAS figures revealed. Also, more than 10,000 people above 35 years of age or above have applied for nursing courses for the first time in 2021, resulting in a 39% increase from the past year.

The work done by NHS has been inspiring people in helping those in most need, as witnessed during the Covid-19 pandemic. Overall, this rise in applicants brings in a positive picture as students plan their futures after lockdown, Ms Marchant added.

Mike Adams, Director for England at the Royal College of Nursing, said that this is a welcome boost after years of decline since the removal of support from the government for living costs and tuition fees.

He, however, warned that the numbers are still not at the needed scale and greater efforts are required to fill thousands of nursing positions in the country.

Meanwhile, the figures show that the number of applications from EU students to other subjects at universities in the UK have fallen by 40% in 2020. UCAS suggested that this may be because of the uncertainty caused by Brexit at the end of 2020 along with changes made to student support arrangements.

However, applications from people from countries outside the EU have risen by 17% to a record 85,610, as compared to last year.

UCAS also mentioned the figures showed that a huge number of 18-year-old students - a record 42.6% of all 18-year-olds in the UK- from the most disadvantaged places in the UK have applied for university study by the main deadline. Last year, the same stood at 39.5% during the same time.

The largest increase in UK applicants by declared ethic groups came from mixed and black students- both up by 15%.

Last year, the UK government introduced bursaries of a minimum of £5,000 per year for students studying midwifery, nursing, and allied health.