From academic excellence, graduate employment to cross-cultural learning, the United Kingdom is considered among the best study destinations across the world. According to HESA statistics, a total of 485,645 international students were studying in higher education institutions in the UK in 2018/19, up from 458,490 in 2017/18. After China, India has been the second top country of origin with over 26,000 enrollments. 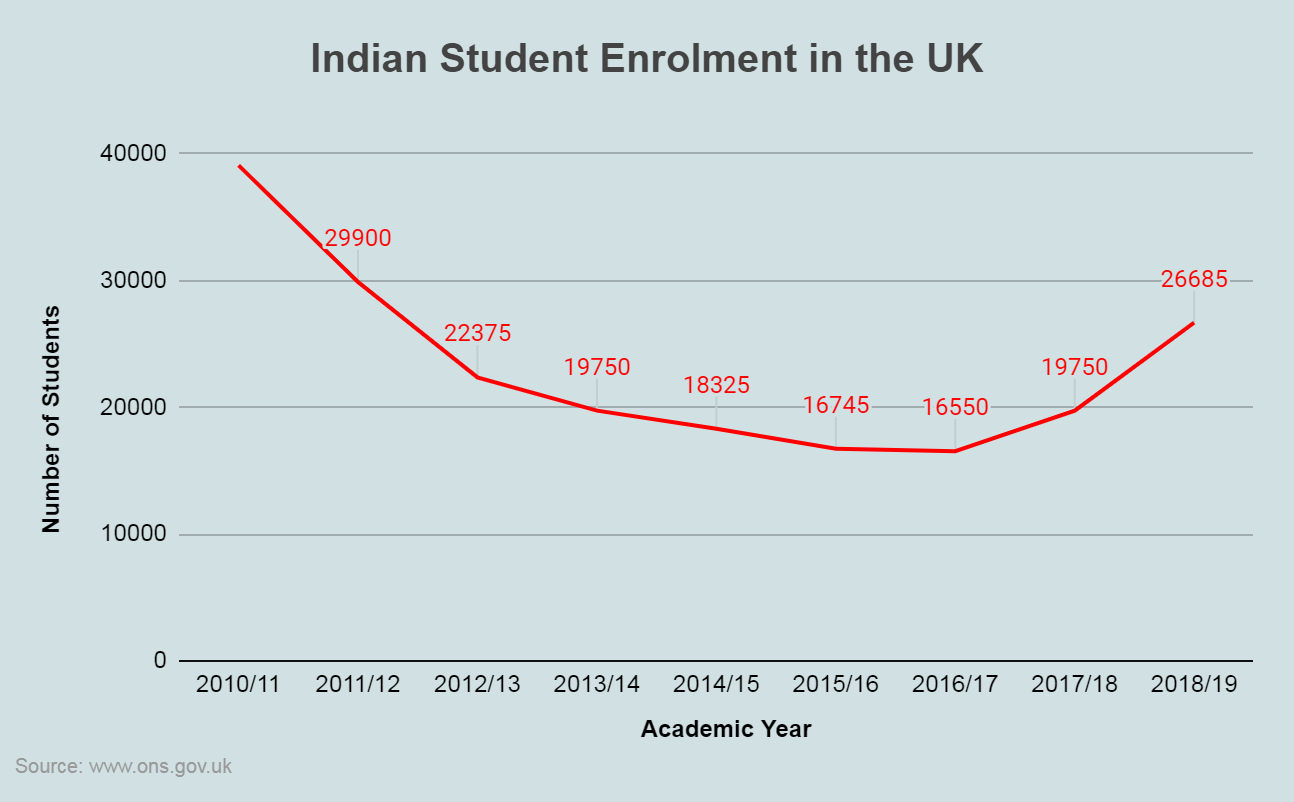 The Global University Employability Ranking 2019, a total of 16 UK universities have been featured of which five are based out of London and the remaining are spread across the country.

The country has over 390 universities and colleges, offering 50,000+ programmes in a vast array of subject areas, of which the most sought after fields include engineering and technology, law, medicine, social science and media and communication. The QS World University Rankings 2021 have also named 84 UK universities from the UK out of more than 1,000 universities from all around the globe. Also, among the 120 universities highlighted in the QS Best Student Cities 2019, 14 are from the UK with London at the #1 world ranking, followed by Edinburgh, Manchester, Glasgow and Coventry.

Moving to the UK promises an amazing student experience revolving around a rich diversity of languages, cultures and faiths. It also allows students to dive into its contemporary culture on world-famous events and holidays, apart from a stunning countryside, vibrant performing arts heritage, fashion and sport. Not to mention the huge variety of food that the country has to offer.

In addition, the UK is the gateway to Europe wherein one can, any day, plan to fly direct to Pisa, Genoa, Rome, Venice and more. It also prides itself on its great transport network and one of the best healthcare systems in the world and low crime rates. Besides, the country is widely known for welcoming overseas students with open arms with the support of international student societies.

With health, wellbeing and safety of all students being the top priority of the Government of the UK, arrangements and instructions have been communicated to each university. A student must get in touch with the respective university or school directly in order to get the required information. Here are the latest UK education-related COVID-19 updates:

Are You Planning to Study in the UK?

Why Study in the UK

The UK education system offers flexibility, allowing students to choose courses that suit their career aspirations and lifestyle. As lakhs of international students pursue higher education in the UK, you will get a chance to meet people from different nationalities, sharing their backgrounds and finding out new perspectives. There are numerous benefits of pursuing higher studies in the UK. Some of them are –

Cost-Effective and World-Class Education: Academic excellence offered by UK universities has a long-standing reputation that can be traced back to the 11th century. Even today, there are over 160 universities and institutions in the country, of which 84 are featured in the 2021 QS World University Rankings. Degrees from these universities are valued across the world, which work best in the future, no matter which industry or location.

International students in the UK enjoy financial benefits and given that the duration of a UK degree is less compared to other countries, studying in the country in any way becomes affordable. Besides that, the country is well known for offering numerous scholarships, grants and bursaries to students from outside the UK.

Great Work Opportunities: International students in the UK are allowed to work part-time for up to 20 hours per week during term time and full-time outside of term time. They may also do a work placement as part of their course or take up an internship which goes a long way in developing new skills, earning money while studying and preparing themselves for the professional world.

The UK government has recently announced a post-study visa or Graduate Route, allowing international students graduating from Summer 2021 to stay and work in the UK for the next two years.

A Welcoming Student Community: According to the QS Best Student Cities, 14 of UK cities are featured in the top 120, making it one of the top student destinations in the world. Whether it is Oxford or Edinburgh, each city in the UK guarantees a wholesome and vibrant student community.

Being the second most popular destination for international students, the UK is a multicultural country where university campuses value diversity and different food, traditions and cultures and interests. This further leads to unique and new student experiences almost every day.

Affordable Cost of Living: Although this is primarily dependent on the location and the area one will be shifting to, in general, the UK boasts decent living standards at affordable prices. Cities such as London, Brighton and Oxford could be a little pricey, but affordable cities such as Aberdeen, Newcastle and Manchester offer high quality of education and lifestyle.

Healthcare in the UK is usually free of charge for international students and they can also make the most of student discounts offered on travel, shopping and food to save money.

Gateway to Explore All of the UK: An international student, if chooses to study in the UK, may easily travel to other parts of the UK and explore its rich culture and history. From landscapes, inclusive culture, great food, festivals, sporting events, castles and palaces, students will be able to see more of the UK.

In London, each area has its own distinct character, which can be experienced in Camden, Little Venice, Brixton, Notting HIll, Shoreditch and more. Students may also venture out into the greenery of the British countryside, full of rich valleys, dramatic coastlines, gleaming lakes, and so on.

Curriculum and Degrees Offered in the UK

The degree structure or higher education in the UK is categorised into the following:

Higher education throughout the UK is offered at various universities, colleges, schools and institutes. They may offer both academic and professional programs irrespective of their title. All these HEIs in the UK have the authority to frame their own curricula, program requirements and grant recognised degrees.

Grading System in the UK

The UK has a peculiar grading system in higher education that aims at giving a more accurate picture of a student’s academic performance.

Higher Education Organisations in the UK

There are a number of higher education organisations in the UK that can be broadly categorised into the following:

Here are the major organisations in the UK established to regulate and oversee higher education in the UK:

Accreditation in the UK

The UK does not give governmental authority to accrediting agencies and hence they are more focused on private institutions and professional study programmes. Higher education institutions in the country are recognised by the British government through legislation such as a Royal Charter or an Act of Parliament. These are the institutions, also known as ”recognised bodies”, that can award degrees to students.

Institutions that are called “listed bodies” are those that have not been recognised by legislation but can still offer a program leading to a degree awarded by a “recognised body”.

Other institutions can award their unique degrees and deliver diplomas also known as “recognised awards”. These institutions are under the authority of the Department for Business Innovation and Skills.

Scottish HEIs are accredited by the Department for Innovation, Universities and Skills and the Quality Assurance Agency. In Scotland, institutions should be deemed “recognised bodies” by the UK government in order to be able to award degrees.

Campus life in the UK means stepping into a whole new world of new opportunities, green spaces, getting involved in different activities, making new friends among several other things. Campuses in the UK are safe with a low level of crime and violence on the streets.

Drinking tea and joining campus societies or clubs are part of the UK university culture. The country is a centre of world music and university campuses are considered the best places for popular artists and bands.

Every UK university has a Students’ Union that focuses on providing each student with the best university experience possible. They organise various fun events throughout the year such as comedy nights, fundraising, gigs and many more. From academic to political, religious and musical societies, every university in the UK offers a huge range of groups to choose from and pursue an existing or new passion.

Almost every sport ranging from rugby to American football is made available for students to play and participate in. The UK university sports culture even lures in students who are not keen sports players because of university rivalry. Most matches in the country are played on Wednesdays, considered equal to sports.

Campus universities provide everything any student possibly needs including shops, a gym, medical facilities, cafes and even a bar. This creates a close-knit student environment, making it extremely fun and memorable.

With the UK being one of the most popular study destinations in the world and hosting a number of top-ranked global u....

As far as living costs in the UK for international students concerned, it depends on your budget, lifestyle, and expe....

The visa system in the UK for students has undergone a few changes. Heres all about the types of student visas....

UK universities are consistently ranked among the top universities in the world not only for thei academic reputation....

Being the fifth largest economy in the world, as per the latest data, the unemployment rate in the UK is approximatel....