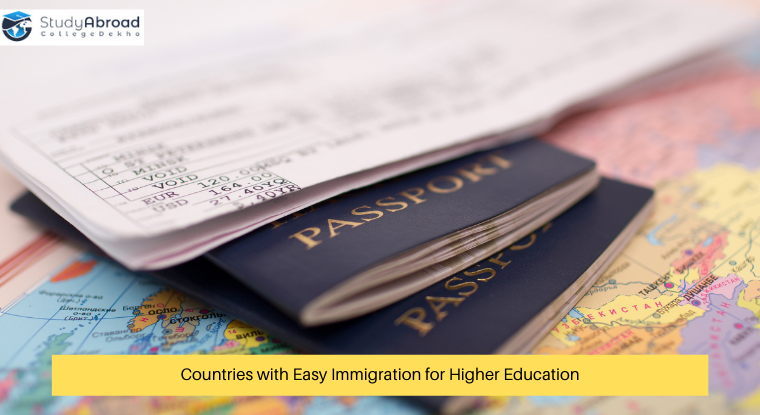 From accessing world-class education to increasing your international job prospects, millions of students across the globe choose to study abroad to get a life-altering learning experience. That being said, one of the deciding factors while planning on pursuing higher education abroad is if the country offers easy immigration to international students or not.

One of the major examples can be of the United States that has seen a decline in international enrollment after the uncertain immigration policies introduced by the Trump administration. The picture, however, is likely to change with Joe Biden, a democrat, having won the US Presidential elections in 2020. With immigration policies playing a crucial role, it is normal for international students to prefer countries that are more flexible and welcoming towards them.

Currently, the top five countries with easy immigration for higher education include Canada, Germany, Australia, Ireland and New Zealand. This article is a compilation of immigration rules for international students in the most welcoming countries along with the top universities that have the highest percentage of international students according to QS World University Rankings 2021.

Study permit in Canada is the document that lets a foreign national to study at a designated learning institution (DLI). However, the study permit is not a visa and would not let you cross Canadian borders. You may also require a visitor visa or an electronic travel authorization (eTA), one of which will be issued along with your study permit.

If you are from countries including China, India, Pakistan, Morocco, the Philippines, Vietnam and Senegal, you may be able to avail a study permit faster through the Student Direct Stream (SDS).

An SDS is usually processed within 20 calendar days, which would also depend on when you give your biometrics.

A study permit is generally valid until the completion of the study programme, plus an additional 90 days which will let you decide on whether to extend your stay or leave Canada.

Speak to our Expert

Colleges in Canada with Highest Percentage of International Students

Have a look at the top universities in Canada with the highest percentage of international students:

If you are aspiring to study in Australia are granted the Subclass 500 Student visa which will let you participate in an eligible programme of study in the country, travel in and out of Australia and work up to 40 hours every 2-week period after your programme begins.

This, being a temporary visa, will remain valid only until the date notified or mentioned in it. The same will primarily depend on the type of course and its length.

As per regulations by the Australian government, you would be required to leave Australia as soon as your visa expires, which cannot be extended. However, you can apply for a new visa in case you wish to prolong your stay or a Student visa if you wish to study further.

If your student visa expires before you graduate, you may be able to stay in Australia on a Visitor visa, for which you would be required to submit a letter from your education provider stating your date of graduation.

Colleges in Australia with Highest Percentage of International Students

Have a look at the top universities in Australia with the highest percentage of international students:

Also Read: Timeline for February 2022 Intake to Study in Australia

If you are looking to study in Germany, you might need a visa along with a residence permit. However, it would depend entirely on the country that you belong to and for how long you intend on staying in Germany.

Applications should be made from the home country, to the German diplomatic missions (embassies or consulates general). Only if you have been accepted to a higher education institution or preparatory college in Germany, can you apply for the German national visa.

A visa issued for study purposes will be issued only for a period of three months, after which you will have to apply for a residence permit from the foreigners’ office in Germany.

In case you are still waiting for your Letter of Acceptance or have to appear for an entrance exam, you must apply for a prospective student visa which are valid for three months and can be extended by six more months after you have accepted to a German university/ college. This would also apply if you have enrolled in a preparatory German language course or foundation course within the period.

As per German immigration rules, a foreign student will be allowed to work up to 20 hours per week while they are studying. If you exceed this time limit, you would have to pay into the German social security system, which might have a negative impact on your studies.

All Non-EU and EEA students coming to Germany for higher education will be able to work for 120 full days or 240 half days per year alongside their studies.

Colleges in Germany with Highest Percentage of International Students

Have a look at the top universities in Germany with the highest percentage of international students:

In New Zealand, there are two broad categories of student visas including the Fee Paying Student Visa and Pathway Student Visa, one of which you should mandatorily possessif you wish to study in NZ for more than three months.

To qualify for a student visa, you will need:

Also, under the Fee Paying Student Visa, you will be allowed to work part-time up to 20 hours per week alongside studying at a German university. The visa will also allow you to live in Germany above a certain age, otherwise you may have to bring your parents or a legal guardian with you.

Colleges in New Zealand with Highest Percentage of International Students

Have a look at the top universities in New Zealand with the highest percentage of international students:

If you are an international student from the non-European Economic Area (EEA) coming to study in Ireland must be accepted to an Irish university to study an eligible full-time course. In order to apply for a visa, you must apply for a student visa and add evidence that you will have €7,000 when you arrive in Ireland.

All non-EEA students who require a visa must register with their local immigration officer to be allowed to stay in Ireland for more than 90 days. Also, if you do not require a visa, then you must have €3,000 when you first register with your local immigration officer, if you are coming to Ireland to study for more than six months.

Under this visa, you will be allowed to work up to 40 hours per week in the holidays and 20 hours per week during term time. Holiday periods in Ireland have been standardised, which begin from June to September and from 15 December to 15 January.

Colleges in Ireland with Highest Percentage of International Students

Have a look at the top universities in Ireland with the highest percentage of international students:

Have Doubts Related to Admissions at Foreign Universities?

If you wish to seek more information about international admissions and international education then you can also write to us at abroad@collegedekho.com and ask us your queries.