USA or Canada? Which is Better for Pursuing MS?

Want to pursue MS abroad? USA and Canada are among the most popular study abroad destinations for MS. However, students who wish to study MS abroad often get confused about which country is right for them. Here's an article that may give you some perspective. 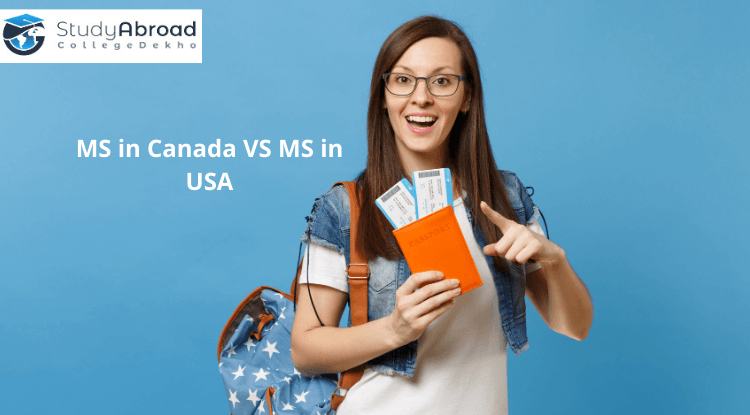 The United States and Canada are among the two most popular study abroad destinations, especially for Indians who wish to study MS abroad. With that being the case, it becomes important to consider a number of factors, check their pros and cons before settling on a country.

Indian students opt for an MS degree abroad usually after the completion of their engineering/B.Tech in India. Some also go abroad to pursue the MS course in a specialised field after acquiring certain years of experience in the industry for better career options and global exposure. MS is a postgraduate degree program that is offered in multi-disciplinary subject areas like Science, Technology and  Medicine. Some of the popular MS degree programs include MS in Computer Science, MS in Mathematics, MS in Chemistry, MS in Physics and MS in Data Science. MS is more of a research-based course than a classroom-based course. The course includes a Masters thesis and a research-based project.

In this article, we have covered some important factors in detail to determine the best choice for an individual to pursue an MS course.

Which is a Better Place to Pursue MS? USA or Canada?

Both US and Canada are famous destinations to pursue MS, which makes choosing between the two all the more difficult. Following are some of the important factors which will help you decide whether to pursue MS in Canada or in the United States:

Both US and Canada host the most-renowned and top-ranked universities offering MS programs. Many top Canadian universities such as McGill University, University of Toronto, and the University of British Columbia have certainly made it to the top in global rankings over the years. Nonetheless, a report from OECD, short for Organization for Economic Cooperation and Development, revealed that the Canadian education system is constantly moving up the world rankings due to its constant innovation. However, students who prefer research are more likely to choose the US over Canada.

In the US, the average tuition fee for an MS is charged based on the total number of credit hours required for successful completion of the degree, with 30 credit hours being the minimum requirement. On the other hand, international students pursuing MS programmes in Canada pay relatively lower tuition fees. However, the same may vary depending on the university, location, specialisation, among other things.

With a large number of corporate giants providing ample job opportunities, the US offers some of the highest-paying jobs to international MS graduates. However, Canada, too, has emerged as a massive job market offering vast scope for research, proper job security and better opportunities to build a strong professional network.

After graduating, the average annual salary offered to an MS graduate in the US is around USD 69,000, as compared to CAD 70,000 in Canada.

Also Read: Part-Time Job in the USA for International Students

The immigration process in the US is quite rigid, which makes settling in the US somewhat difficult. However, after Joe Biden came to power in 2021, immigration rules and policies introduced by the Trump administration are being reversed. This will, in the coming years, make it easier for international graduates to live and work in the US.

In Canada, with an Immigration Levels Plan for 2021-23, the country expects to welcome over 400,000 immigrants every year, making Canada more accepting of migrants than the US. Also, Indians were the largest group by 'country of origin' to be issued express entry and other categories of Canadian skilled immigrant visas in 2019, offering greater ease of living and settling than the US.

Overall, the US is more densely populated and warmer than Canada although climate in both the countries vary greatly by state or province. According to U.S. News & World Report, Canada ranks first in Quality of Life Rankings 2021, which is based on factors such as affordability, a good job market, family friendly, income equality, well-developed public health system as so on. The US ranks 20th even though it is placed 4th for its job market and 51st for affordability.

MS in Canada vs MS in US

The following table demonstrates a comparison between MS in US and MS in Canada based on various parameters:

Note: *The lists of scholarships offered by both the countries are not exhaustive.

Considering all the parameters mentioned above, both Canada and the USA stand out among all other countries in the world in terms of quality of education, tuition, programmes, scholarships and post-study work permit. However, MS from Canada would cost you way less than MS from the USA.

Write to us at abroad@collegedekho.com to get all your doubts cleared regarding MS admissions in the US and Canada.