Higher education institutions in the New York State have written to the Government of the US asking it to  reopen consulates for F-1 visa application processing and appointments and start holding online interviews or waive face-to-face interviews. 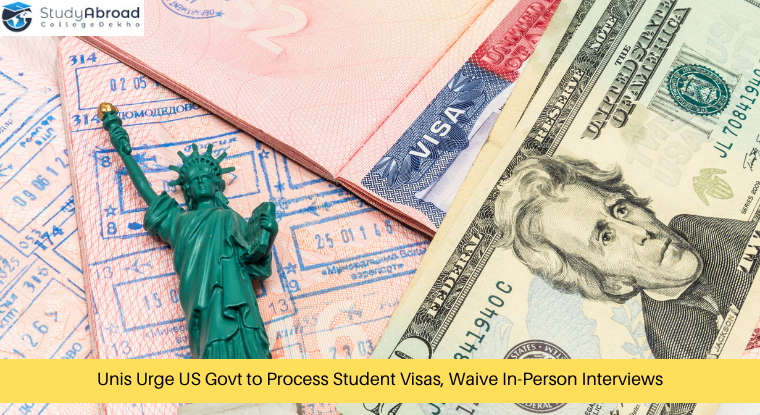 Given the delays in the processing of US student visa applications amid COVID-19, 17 higher education institutions in the New York State have written to the Government of the US asking it to reopen consulates for F-1 visa application processing and appointments.

In the letter, the institutions also urged the government to either start holding online interviews or waive face-to-face interviews for visa processing. It further suggested the extension of travel exemptions for international students, especially those from China and India.

Leaders of universities such as the University of Rochester, Cornell, Columbia, University at Buffalo and Stony Brook University pointed out their concerns about how international student visas are not being processed as many embassies and consulates across the world continue to remain closed.

This is especially a matter of urgency for international students who wish to study in the US in the next academic year, given the average time required to get visa applications processed, the letter mentioned.

F-1 visa processing services particularly in China, which sent 34.6% of international students to the US in 2019-20, according to Oper Doors statistics, should be resumed. The same have been closed for more than 13 months now.

US institutions have also been witnessing fewer applications from students from India, which sent over 193,000 students to the US in 2019-20.

Currently, students from the UK, European Schengen area and Ireland are exempt from US travel restrictions.

The US has already waived interviews for its Temporary Non-Agricultural Workers H-2 visas, the letter continued.

A NAFSA Member Interest Group previously warned that such visa processing issues will lead to thousands of students from China choosing not to travel to the US this fall.

President of New York University Andrew Hamiloton, while speaking at a Presidents’ Alliance and NAFSA action alert briefing, expressed his concern about embassies and consulates across the world not being able to deal with the  demand for visas.

NAFSA estimated in May last year that US higher education could experience a loss of almost $3 billion due to the decline in prospective enrolments,  Senior advisor at the Presidents’ Alliance, Rajika Bhandari mentioned.

Countries like the UK are letting international students to arrive provided they follow all the public health guidelines and quarantine requirements. International students, in order to start in the fall semester, should start choosing their study destination and applying for visas in April, the letter added.

Go Local, NYU’s backup plan, is an opportunity for international students stuck in their home countries to continue their NYU education at one of their global sites. Its Shanghai site has already welcomed around 3,000 students and hundreds have joined sites in Europe and other parts of the world.

However, Hamilton added that they are aware of the fact international students want to study in the US, be on campus and experience university life.

If an action is taken now, the US government will be able to deliver a welcoming message to both current and prospective students and further restore it as a destination of choice, the letter suggested.

Stay tuned for the latest news and updates on higher education in the US!