A UCAS report highlighted that the drop in EU applications in 2021, has driven the overall decline in applications through the admissions operator. While there has been a significant rise in Non-EU applications, EU applications have dropped, with acceptance rates for both categories witnessing a drop as well, compared to 2020 figures. 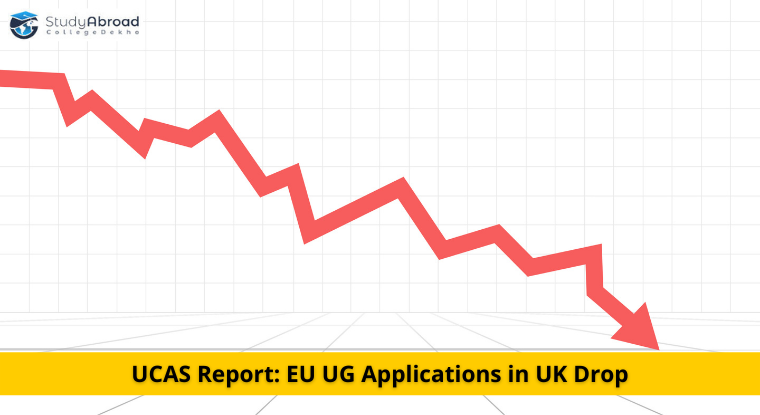 According to The Pie News, in 2021, UK universities saw a total of 142,925 international applications, thus indicating a 5% drop on the 2020 figures according to the UCAS end-of-cycle release data. Further, the total enrolment of Non-EU and EU students accepting places through UCAS, the application operator, dropped from 85,075 in 2020 to 70,005 in 2021.

Numbers, in terms of the applications from outside the EU, displayed a 12% rise in applications, i.e. 111,255 applicants, with 54,030 being accepted, thus representing a 2% rise. In the case of EU applicants, a significant drop in numbers had been witnessed, with 31,670 applications depicting a 40% decrease and 16,025 acceptances, depicting a 50% decline.

Regardless, UCAS also highlighted 140,000+ applications being received from outside the UK, which indicated that the country still remains a top study abroad destination among prospective international students.

UKCISA Chief Executive, Anne Marie Graham, welcoming the overall findings, spoke to the media, stating that the UK’s visa application system continues to be flexible, competitive and accessible, to facilitate more students from around the world to study in the UK.

According to The Pie News, a 7% increase in the number of 18 year-olds being enrolled in UK universities, including domestic students. Additionally, 81% of the students received a place in their first choice of university or college.

UCAS Chief Executive, Claire Marchant commented that the higher education admission system should meet the needs of the students since the UK is set to hit a million applicants by 2026.

However, the EU applicant figures are a little grimmer than expected, with only 31,670 prospective EU students applying to UK universities in 2021 through UCAS, which depicted a 40% drop compared to 2020 numbers. In fact, the acceptance rate of EU students in 2021 was half that of 2020, with 16,025 being accepted in the previous academic year, compared to 32,320 being accepted in 2020.

A UUKi spokesperson, speaking on the decline of EU applicants, stated their disappointment, adding that the institute will continue “to urge the government to explore ways to encourage students from the EU to apply to UK universities”, such as new and different scholarship opportunities in the UK as well as “Study UK campaigns”.

Additional data from the report also highlighted a drop in figures across the UK, however, it was Scotland that faced the biggest drop in international student application in 2021. As per reports, Scotland witnessed a 52% drop, i.e. 20,030 applications in 2021 compared to 42,350 applications in 2020.

According to the recent “UCAS Where Next? The experience of international students connecting to UK higher education report”, over half the undergraduate students placed in the UK came from seven particular countries, with two out nine applicants being from China.

Additionally, the report also highlighted 9 out of the 10 international students saw the UK as a “positive place to study”. However, at the same time, 72% of the surveyed students also reported a need for “more information on what their year would like” and the impact of COVID on their education.

Nonetheless, UCAS stated that the findings from the 2021 cycle report show the overall strong demand for the UK” even during a pandemic.

Wish to Study in the UK?