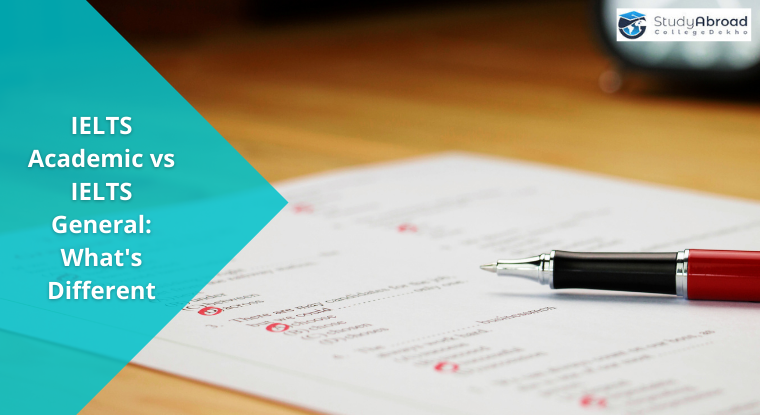 If you've decided to pursue higher education abroad then you must also have decided upon the standardised tests that you're going to appear for. Most likely you have decided to go for IELTS and are preparing to attempt the test and get ready for your adventure abroad. But wait! You find out that there are two types of IELTS tests that you can attempt and are confused between the two.

Worry no more! In this article, we shall discuss the difference between the two IELTS tests, viz. IELTS General and IELTS Academic, and which you should take for your higher education prospects.

What is the IELTS Academic?

As can be perceived from the name itself, IELTS academic has been designed primarily for aspirants who wish to pursue higher education different study abroad destinations like the United States of America, Canada, United Kingdom, etc. Including a more technical and professional syllabus, IELTS Academic is accepted worldwide and can be a preferred choice for many institutions. IELTS Academic provides the institution with the knowledge that you possess the needed knowledge and skills to move forward in the country under an academic and professional environment.

What is the IELTS General?

Similar to IELTS Academic, IELTS General has been designed for all aspirants travelling or migrating to other destinations like Australia, New Zealand, Germany, etc for secondary education, training or work experience, among others. IELTS General is highly recommended and accepted the world over and in many countries, a mandatory requirement. IELTS General evaluates your potential to basically survive in an English-speaking society and assess your survival skills in a broad workplace and social situations.

From what can be seen in the definitions for IELTS Academic and IELTS General, it is clear that both tests, even though are similar, have different uses. In fact, the tests more or less are similar as well, with most of the topics and duration being similar with a little twist here and there. The major difference between the two tests arises in the applications of these tests and their scores.

Both the tests, i.e. IELTS Academic and IELTS General consists of four distinct sections, viz. Listening, Reading, Writing and Speaking. These sections have been designed carefully to assess the different parameters of a candidate and define their potential. Primarily, the Listening and Speaking sections in both IELTS Academic and IELTS General will be similar with little to no changes. The major differences are seen in the Reading and Writing sections of both the tests, where the topics of concern change as well as the question-type changes.

Also Read: IELTS or TOEFL? Which Exam Should You Take to Study Abroad?

The major differences between IELTS Academic and General Test lie in the Reading and Writing sections of the test, which have defined below.

Note: Under the writing section of both IELTS Academic and IELTS General, candidates will not be allowed to write the passages using Notes or Bullet points.

Mentioned in the table above are the major points of differences that are commonly seen between the two IELTS tests. However, these differences make the candidate eligible for different reasons to travel abroad and pursue their ambitions.

Now let’s look into the similarities that are found between the two IELTS.

Also Read: 10 Mistakes You Should Avoid Making on Tests like GRE and GMAT

Thus, apart from the Reading and Writing sections of the tests and the applications of the test scores, IELTS Academic and IELTS General are similar in nature. However, if you are travelling abroad for higher education purposes, one of the better options for you will be to attempt IELTS Academic as most universities prefer IELTS Academic scores. Before applying to a university or college, go through the respective admissions requirements for international students and attempt the tests recommended by the University of your choice.

Both Speaking and Listening sections under IELTS Academic and IELTS General are important sections and many students struggle to clear these sections. Therefore, ensure that you are prepared for the tests with as much practice as possible.

Top Universities for You in the World

Here is a list of some of the top universities in the world that offer academic programmes that are globally recognised and reputed.

Also Read: Everything You Should Know About GRE General Test at Home

These are just a few of the universities and colleges that you can apply to pursue your higher education aspirations. Across the world, you will find thousands of globally competitive universities that offer unique student experiences and help build career opportunities and paths that one dreams of.

If you are interested in checking out the different colleges and universities on offer across the world, then check out our website and browse through the sea of options in universities, colleges and institutions.

You can also clear out your doubts regarding international admissions and education by reaching out to us at 785-9990-990 or at abroad@collegedekho.com.