Tighter immigration and visa policies introduced by the Trump administration led to a decline in the number of Indian students choosing USA as a study abroad destination. Will Joe Biden's victory in the US presidential election 2020 turn around things? Let's find out! 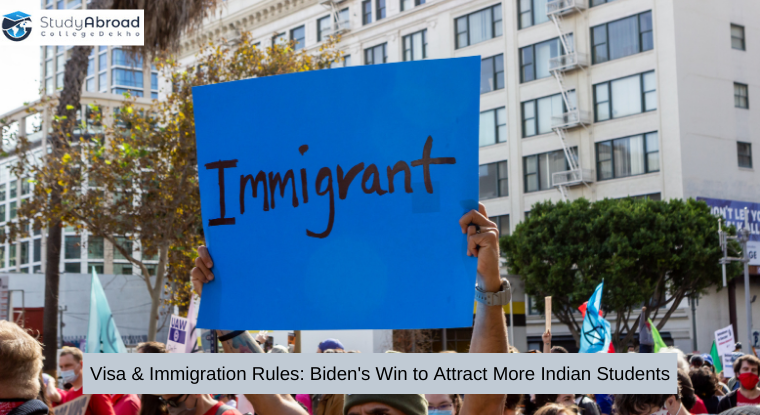 The victory of Joe Biden is expected to bring good news for Indian students who dream of studying in the top US universities. As the U.S. President-elect Biden prepares to take charge, there is a lot of buzz in the education sector around the various reforms that he will bring. It is being speculated that Biden is most likely to reverse most of Trump's policies, including the latter's move to make immigration and visa access stricter for international students.

Under Trump's administration, the issue of immigration and visa rules had beocme a huge cause of concern for students in India applying to US universities as well as students who were already in the US.

Partner and leader (education practice) at EY Parthenon, Amitabh Jhingan said that Democrats are rather very flexible about immigration. Over the past few years of Trump rule, there has been a decrease in the number of Indian students coming to the United States. The numbers are likely to go up now.

Education experts have also predicted that the numbers slightly go down this year in view of the tighter immigration and visa policies and Covid-19 pandemic.

Pointing out that the US turns out to be one of the big student markets every year, Jhingan added that Canada, Australia and the UK have witnessed the largest growth in terms of the number of outbound students. Nearly 40% of foreign students go to the US.

Referring to the Biden victory, a co-founder of CollegeDekho’s Study Abroad portal Rajiv Singh, said that the US will gain its momentum again for Indian students who have been moving towards Canada.

Almost 80% of the students who go to the US apply for postgraduate degrees and the rest for undergraduate, which has been growing from 15% to 20% at present.

Between 2010 and 2016, there has been an increase in the number of Indian students going to Australia and Canada by 125% and 240% respectively. On the contrary, there has been a rise of only 30% for the US.

Managing partner of MZM Legal Zulfiquar Memon said that the reason for this is the rigid visa policies, which might be addressed now and lead to a resumption of these numbers for the US.