Why TOEFL May be a Better Option Than IELTS

Confused between the TOEFL and IELTS? Well, you are not alone! Both these popular English language proficiency tests are quite similar and are widely accepted around the world for undergraduate and graduate admissions. No wonder, it's a tough choice! 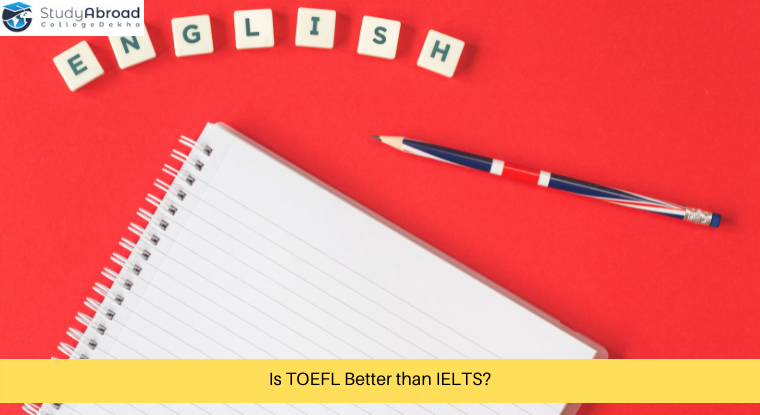 There have been endless discussions on which one is best among the two - TOEFL or IELTS? Well, there can't be a common answer for everyone. If you're preparing to study abroad, you will most likely have questions such as - which exam does my desired university accept, what is the difficulty level, which exam is better suited to my strengths or which exam can I take without any hassle?

If you ask me, TOEFL has always seemed like a better choice!

To begin with, let me clarify that TOEFL is the only English communication test aimed at simulating actual classroom experience through 100% academic content.

And before you flip a coin to make a choice between the two tests, here are my further reasons to explain why TOEFL seems a better option than the IELTS exam, especially in the Covid times.

Reasons Why TOEFL May Be Better Than IELTS

No matter where you are (except Mainland China and Iran), you can take the TOEFL iBT Home Edition from the comfort of your home. Launched in response to the COVID-19 pandemic, the TOEFL iBT Home Edition is now a standard option for test takers and will be available for the foreseeable future, along with the option of testing at a test center. This is not in the case of IELTS Indicator, an official product of IELTS, which will remain available only for a limited time as IELTS in-person testing is currently suspended due to the pandemic.

In addition, while the IELTS Indicator test is conducted only once a week at a scheduled time, the TOEFL iBT Home Edition is available 24 hours a day, four days a week, with bookings as early as 24 hours before the test.

Also, the IELTS Indicator has not been developed for immigration purposes, whereas, TOEFL iBT Home Edition can be taken by anyone with equipment requirements for the test. On TOEFL at Home, a human proctor will be there during check in, identity verification and throughout the entire session to monitor you and ensure that you are following all testing procedures, leaving almost zilch differences between the home and test centre version. TOEFL’s artificial intelligence (AI) technology further helps in maintaining test security.

Ultimately, it is 'Your test. Your choice.'

Here is a table that may help you further distinguish between TOEFL iBT Home Edition and IELTS Indicator:

The scoring for the TOEFL iBT at home is exactly the same as TOEFL iBT, allowing you to not prepare for the two separately. Because this is still a TOEFL iBT test, the home edition scores will be accepted and used in the same way as the test center version. It is completely identical in content, format and on-screen experience to TOEFL taken at a test centre.

TOEFL is the Most-Preferred Across the World

When I say TOEFL iBT is the most-preferred, I am not kidding! More than 11,000 universities in 150+ countries use it to evaluate an international student’s English language proficiency. It is accepted by 100% of universities in the UK, including schools that are part of the Russell Group. Same is the case for universities in Australia and New Zealand and for all migration visas.

Over 80% of graduate programs offered by Canadian universities prefer TOEFL iBT scores. According to ETS, the administrator of the test, universities in Canada receive more TOEFL scores than all other English language proficiency tests combined.

Well, everybody is well-aware of the fact that the US is the largest recipient of TOEFL scores. What you might not know is that the TOEFL iBT is accepted by 9 out of 10 universities not just in the US but elsewhere as well.

It is also the most-preferred English language proficiency test across Europe and especially in Germany and France. It is also widely trusted in Asia, with top universities in Hong Kong, China, Japan, Korea and Malaysia preferring the TOEFL.

When you take the TOEFL, you automatically stand out from the crowd. According to an ETS Survey of 296 TOEFL test takers who were also university students who took the TOEFL test, over 90% of them were accepted into their first or second choice university.

As mentioned right at the beginning, unlike other English language tests, TOEFL iBT is based entirely on academic content, specially designed for a smooth transition to university. On the TOEFL, you use authentic language media which not only prepares you for the test but also after you have arrived on campus.

The TOEFL iBT, a combination of all four communication skills including listening, reading, speaking and writing, helps evaluators identify students who are ready to communicate in an academic setting. The higher-standard TOEFL helps you demonstrate your superior academic English skills and feel confident to stand out regardless of which study destination you decide to go to eventually.

No Dreading an Oral Interview

Are you also intimidated by oral interviews or speaking in front of a person? Well, you are not alone and I have been there. On the TOEFL, instead of speaking to an examiner (which is in case of the IELTS Academic Speaking section), you will speak into the microphone on your headset and your responses will be recorded. This way, you neither have to engage in a two-way discussion nor a 9-minute interview. Not to mention that speaking via computer does away with potential bias of face-to-face interviews.

You will get 15 to 30 seconds to prepare before answering a question and your response needs to be 40 to 60 minutes long. The same will be scored not just by human raters but also by AI which certainly ensures fairness and quality. On the other hand, the IELTS requires the examiner to score the Speaking test, which might not be as fair as artificial intelligence.

A lot of things come into the picture when we talk about fairness and unbiased scoring in English language tests. If I dive into the score ranges, TOEFL is scored on a scale of 0 to 120, compared to a nine-band scale of IELTS. On the IELTS, each section is graded on a scale of 0 to 9 following which an average score of all sections is represented through a final score within the same range of 0 and 9. So, if you do not perform well enough in a particular section, it is likely to show in your final average. However, TOEFL scores are based on each section graded on a scale of 0 to 30, resulting in a final average between 0 and 120, along with a performance-based report.

Responses on the TOEFL iBT are typed on the computer keyboard, which are sent to ETS, where they are scored by AI scoring AND multiple certified human raters who ensure fairness, accuracy and quality. In case of IELTS, responses are assessed only by examiners. Also, TOEFL raters are trained and monitored daily to ensure that only the highest quality ones are scoring. Moreover, there is no scope of geographical bias on TOEFL as raters are from all across the globe.

Also Read: SAT vs. ACT: What is the Difference & Which One is Right For You?

TOEFL raters or AI, for that matter, do not require you to be experts in a section, particularly in the writing section. Designed only to measure your proficiency in the language and not in-depth knowledge of a topic, they understand that essays written on the test are only the first draft.

ETS invests over $60 million every year on state-of-the-art security to ensure the quality of candidates and protect the integrity of test scores.

Still Confused Between TOEFL and IELTS?

Disclaimer: The opinions and views expressed in this article belong solely to the author. Students are recommeded to make a choice between TOEFL and IELTS based on their own research and analysis.