UGC-NET is conducted by National Testing Agency (NTA) twice every year. UGC NET is conducted in order to check the eligibility of the Indian candidates for the post  of ‘Assistant Professor’ and ‘Junior Research Fellowship and Assistant Professor’ in Indian universities and colleges. Till 2018, UGC-NET paper was conductdd by the CBSE in 84 subjects at 91 cities across the country. However from the year 2018, UGC NET exam is being conducted by the National Testing Agency (NTA).

In the following article, UGC NET paper analysis for Paper-1 and Paper-2 has been discussed. The UGC NET paper analysis for the year 2022 will eb made available soon after the exam  has been conducted by the NTA agency. Candidates can take an idea from the given information about the UGC-NET examination as what is going to be the difficulty level of UGC NET 2022, preparation/weightage of topics,  topic-wise distribution of questions,  important topics, commonly asked questions, and the number of good attempts.

UGC NET Paper Analysis  2022 will be made available here once the exam has been conducte by the NTA. UGC NET exam 2022 will be conducted by NTA for a total of 84 subjects. UGC NET 2022 exam will be conducted all across the India in 541 cities. UGC NET paper analysis will help the candidates to understand the difficulty level of the examination. Along with that various other information will also be provided in the paper analysis such as type of questios asked, important topics, sub-topics of different important topics, marking scheme, number of attempts, etc.

In the following sections, UGC NET paper analysis for previous years have been provided. Candidates can go through the article in order to understand the previous year paper 1 and paper 2 analysis of UGC NET exam. Candidates can take an idea from the previous year paper analysis as what kind of questions are asked in the UCG NET paper and what is the difficulty level of the paper. Accordingly, candidates can then prepare for UGC NET 2022 exam which is scheduled to be conducted in the month of July and August. Along with that, candidates can also check the important dates which has also been provided in the given artice as to check about the different events related to UGC NET 2022 exam.

UGC NET 2021 is being conducted from November 20 to December 5. You can check the detailed question paper analysis of the UGC NET 2021 Paper 1 exam here. Along with the day-wise analysis, the memory-based questions for Paper 1 will also be available here.

The UGC NET 2020 was conducted from September 24 to November 05, 2020. The students can check the shift wise UGC NET 2020 exam analysis from this page. Once the exam is over, we will also update the questions and tentative answer keys for UGC NET 2020.

The UGC-NET 2019 Paper I, which was conducted on 20 June 2019 during the first shift, was moderately difficult according to the candidates. If the candidates are to be believed, then the UGC-NET 2019 Paper I was based on the UGC-NET previous year question papers. They also feel that the difficulty level of this year’s paper saw a marginal dip compared to the previous year. The students found the Mathematical and Analytical Reasoning section to be the most difficult amongst all the sections. Some students also found the Computer Knowledge section a tad more difficult. Overall, the Paper I of UGC-NET 2019 examination was doable and anybody who has solved enough number of mock test papers and previous year papers will fare well in the exam.

UGC-NET 2019 Paper II for Linguistics was also moderately difficult as per the students who appeared for the same. Some questions, however, that were based on Syntax, for eg, Generative Syntax, Traditional and Structural Syntax were the ones which the test takers found to be difficult. Historical Linguistics based questions were, however, easy in the opinion of the candidates. Overall, the candidates felt that Paper II for UGC-NET 2019 exam was on the easier side compared to the previous year.

The candidates had to appear for two different papers, where paper-I was common for all candidates and paper-II comprised of subject-related questions.

A majority of test takers who shared their feedback said that the exam was of moderate difficulty level and they faced issues while answering questions in online mode. Now, we bring to you a detailed insight into students’ reactions and the difficulty level of UGC NET 2018 conducted on December 18.

The paper I of UGC NET comprised of generic questions that were meant to evaluate candidates' teaching/research aptitude. This paper has been designed in such a manner that it tests candidates' reasoning ability, comprehension, divergent thinking as well as general awareness. Paper I has a total of 50 questions carrying 100 marks. The Teaching Aptitude and Reasoning sections had more questions as compared to other sections, which was not the case in previous years. This year, Teaching Aptitude section had about 10-12 questions whereas 6-8 questions were asked in the Reasoning section.

The paper II of UGC NET 2018 comprised of multiple-choice questions specific to a candidate's preferred subject. This paper was also found to be of a moderate difficulty level. Every year, UGC NET is held for about 100 subjects.

UGC NET shift 7 & 8 exam was conducted on December 05, 2019, and the candidates can check the detailed question paper review below -

UGC NET Shift 3 exam is concluded, and according to the response received from students, the question paper was easy to moderate. Some topics in Paper I such as Data Interpretation turned to be easy for students, and there are some questions on contemporary topics like 4GL - 4th Generation Language. There were also questions about Classroom Communication and Effective Teaching. The highlights of Shift 3 are as follows- 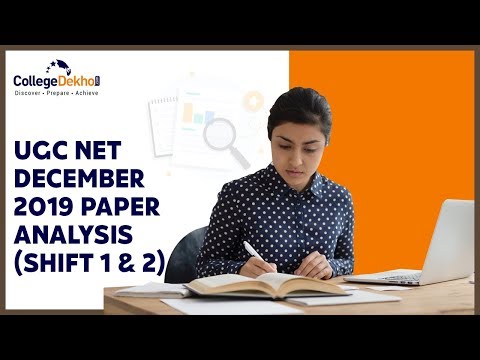 The shift 1 exam of UGC NET December 2019 concluded by 12:30 PM, and the detailed analysis of Shift 1 has been updated below. According to the response received from students, the Paper I of UGC NET Shift 1 (December 2019) is as follows -

Given below is the table comprising important dates in context to UGC NET 2022:

If I choose History as an optional subject for my UPSC entrance exam and fail to clear the exam, can I apply for UGC NET with History?

Dear student, it seems that you are mixing up two very different things completely. In order to be eligible to apply for the UPSC civil services examination, you at least need to have a graduation degree from any recognised University. For UGC NET, the minimum qualification required to apply is a postgraduate degree. Thus, only if you have completed your Master’s degree study in History or any related subject, you are eligible to apply for UGC NET with History as your main paper. We suggest you take a look at the following links for a better understanding regarding both UPSC …

I have completed my MBA and In my graduation (BA - Major in English). Please suggest, do I need to select the management paper for NET exam or I could have Option to choose another subject as well,Like as History.

You can select any subject of your choice in UGC NET 2020 and there is no such limitation restricting you to choosing subjects related to your academics. However, it is recommended that you choose a subject related to your post-graduation or graduation as it helps a lot in the exam.

Check the eligibility criteria and syllabus of UGC NET for more details. Please feel free to write back if you have any queries.

Where can I find the detailed syllabus and exam pattern for UGC NET Mathematics exam 2020?

Dear student, as per the latest information available on the official website of the University Grants Commission (UGC), there are no details regarding the conduct of the UGC NET mathematics exam. There is no syllabus and exam pattern for the UGC NET mathematics exam available on the official website. However, you can apply for CSIR UGC NET 2020 exam in which there is a subject called - Mathematical Sciences. The CSIR UGC NET 2020 mathematical sciences exam is expected to be conducted in the second week of November and you can find out all the details regarding the same from …

Still have questions about UGC NET Exam Analysis ? Ask us.

How many questions are asked for the Logical Reasoning section at UGC NET exam?

There are 7-8 questions asked for Logical Reasoning section at UGC NET exam.

Were there any negative marks for wrong answers in UGC NET?

Yes, negative marks were there for wrong answers in UGC NET?

How many questions are asked for the Teaching Aptitude section at UGC NET exam?

There are 11-13 questions asked for Teaching Aptitude section at UGC NET exam.

How was the difficulty level of Teaching Aptitude for UGC NET?

The difficulty level of Teaching Aptitude for UGC NET was difficult.

How was the difficulty level of Reading Comprehension for UGC NET?

The difficulty level of Reading Comprehension for UGC NET was easy.

Were there logic questions for UGC NET?

Yes, there were various logic questions in UGC NET.

What questions were there for Mathematics subject in UGC NET?

In UGC NET, Mathematics had a question from Simple Interest, Compound Interest and Surface Area.

How was the difficulty level of mathematics for UGC NET?

The difficulty level of mathematics for UGC NET was moderate to tough.

How many students appeared for the exam?

Which shift was tougher for UGC NET 2021?

Shift 2 for UGC NET was a bit difficult compared to shift 1.