Get CLAT Sample Papers For Free

CLAT 2023 Cutoff is released after the CLAT Result Declaration and the CLAT 2023 Counselling and CLAT 2023 Seat Allotment rounds are held separately for 5-year integrated LLB and Master of Law - LLM. The cutoff for CLAT 2023 is usually released in 5 rounds.

The cutoff is category-specific and is available for all CLAT 2023 Participating Colleges. All 22 National Law Universities (NLUs) offer 5-year LLB and 19 participating NLUs offer LLM. Provided below is the CLAT cutoff for all the previous years: 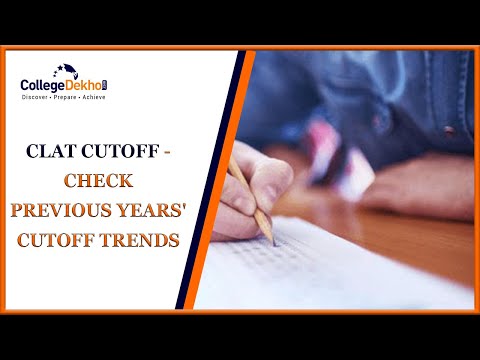 The cutoff scores signify the CLAT score or CLAT rank at which law aspirants are offered admission in different colleges accepting CLAT scores/ ranks for admission. Since CLAT counselling may include 5 seat allotment rounds this year, there will be a cutoff for each round. The CLAT cutoff will be the last rank for which admission is offered in that round. If a candidate scores below that, he/ she will not get admission. Scroll through the page to find the expected CLAT Cutoff 2023 and also the CLAT previous year's cutoff.

The Consortium of NLUs will publish the CLAT Cut Off 2023 marks on the official website separately for UG and PG programmes.

In general, the cut-off for the general category will be higher than for the SC/ST/PwD categories. Find out the previous year's cut-off figures for various categories in the table below.

Aspirants should know that the CLAT cutoff for top-ranked NLUs in 2023 will be higher. Among the most popular NLUs are NLSIU Bangalore, NALSAR Hyderabad, WBNUJS Kolkata, and NLU Jodhpur. A CLAT score of 100-105 is deemed adequate for admission to these top law schools.

After the completion of CLAT 2023, candidates can check their expected rank in the CLAT Rank Predictor. More than the number of attempts, the accuracy level of the attempts will matter.

Check out the important dates related to the CLAT Cutoff 2023 below.

Given below is the importance of the CLAT 2023 Cutoff

Below is the CLAT cutoff for Round 1 Opening and Closing Ranks for the General, OBC, SC, ST categories

We have shared PDFs of the CLAT 2022 cutoff for undergraduate courses. Compare the opening and closing ranks for various student categories from the tables below.

The following table shows the CLAT 2022 cutoff starting and closing ranks for all NLUs.

The CLAT 2021 cutoff for round 1 of counselling for both integrated-LLB and LLM courses has been published for each enrolled NLU category-wise.

The PDFs for the CLAT UG opening and closing ranks for the NLUs are provided below.

Given below is the CLAT 2020 cutoff for UG admissions.

Candidates can check out the category-wise opening and closing ranks of various CLAT participating institutes for the year 2019.

The candidates can check the previous year opening and closing rank for CLAT PG 2019 from the table below.

The CLAT Cutoff for the previous year's is captured underneath.

Colleges you can apply

Want to know more about CLAT

Need to apply for clat how it is

Please write back to us or call on the CollegeDekho student helpline number 1800-572-9877 in case of further queries.

While CLAT scores are also accepted for admission by many other law colleges in India, it is not necessary to appear for CLAT for BA LLB admissions.

There are many colleges and universities that either conduct their own law entrance exams or accept admissions to BA LLB programme on the basis of class 12th merit. Here is a list of top law colleges in India. You may have to check the requirement for individual universities to find …

Hey. Can I study for AILET and CLAT from the same books?

Since the syllabus of AILET and CLAT are almost the same, you can study from the same books for both exams. However, while preparing make sure to solve the last year's question papers, sample papers and mock tests for both the exams separately. It would strengthen your preparation and make you understand both the exams better. Go through the link below to make your preparation easy.

Still have questions about CLAT Cut Off ? Ask us.

FAQs about CLAT Cut Off

How much should I score in the English section of CLAT to clear the cutoff?

The CLAT cutoff for the English section is tentatively 30. If you score equal to or above this, you will be able to clear the CLAT cutoff easily.

What is the expected cutoff of CLAT for the GK section?

The expected CLAT cutoff for the General Knowledge and Current section is around 30-35.

Is there a section-wise cutoff of CLAT?

Yes, there is a defined section-wise CLAT cutoff every year. Candidates must make sure that they qualify the cutoff of each section of CLAT.

Which NLU has the highest CLAT cutoff?

NLSIU Bangalore, NALSAR Hyderabad, NLU New Delhi, WBNUJS Kolkata are among the top NLUs which have the highest CLAT cutoff every year.

Can I apply for admission to a college whose CLAT cutoff I do not qualify?

No, you cannot apply for admission to a law college whose CLAT cutoff criteria you fail to meet. The college will not consider your application and will not send you the call letter for the counselling process.

Why is CLAT cutoff important?

How is CLAT cutoff determined?

The CLAT cutoff is determined on the basis of several factors. Some of them are: number of seats available, number of candidates who appeared for the exam, previous year CLAT cutoff, number of qualifying candidates, difficulty level of the exam, etc.

Is CLAT cutoff for all the colleges same?

No, the CLAT cutoff is different for all the colleges that participate in the entrance examination.

Is CLAT cutoff the same for every category?

No, different cutoff lists of CLAT are released for all the categories. The Consortium publishes category-wise CLAT cutoff separately.

When is CLAT cutoff declared?

The cutoff of CLAT is released after the CLAT results have been announced.

What is the minimum cut-off score cut off for CLAT 2022?

There is no minimum cut-off score for CLAT 2022. However, admission will be done on the basis of the score obtained in the entrance exam.

Cutoff in CLAT LLM admission test is expected to be introduced in 2022 according to the revised exam pattern for CLAT 2022.

CLAT Admit Card 2023 to be released on December 6

How to Crack CLAT 2023 in First Attempt