Predict your percentile based on your NMAT by GMAC performance

NMAT 2022 admit card is made available 24 hours after a candidate has registered for the exam. Unlike other MBA entrance exams, NMAT 2022 aspirants do not have to wait for a particular date to download their admit cards. The NMAT admit card 2022 is released online on the website. NMAT 2022 application process is ongoing and candidates can register till October 10, 2022. NMAT 2022 exam is being held from October 10 to December 19, 2022.

To access the admit card, candidates have to visit the official website of NMAT (nmat.org) and log in using their User ID & Password.  All the details mentioned on NMAT admit card must be verified carefully by the candidates and in case of any discrepancy, it must be immediately reported to the concerned authority to get it resolved.

Step 1: Go to the official website of NMAT (nmat.org)

Step 2: Click on the Register button available on the page.

Step 3: A new page will open containing the registration box.

Step 4: Click on the link that says 'Existing User? Login'.

Step 6: You find the link to download your admit card on the next screen.

Save the admit card to your device and take a printout to take to the examination center. The admit card must be kept safe until the entire admission process has been completed.

NMAT 2022 admit card is a document that defines the eligibility of the candidate to appear for the concerned examination at the specified venue and date. Candidates must go through the following details mentioned on the NMAT 2022 admit card carefully:

Here are some of the important instructions for candidates mentioned on the NMAT 2022 admit card:

Below is a list of ID Proofs that can be considered at the exam center along with the NMAT 2022 admit card. Candidates can bring any of these documents and sit for the examination after the verification. These documents include:

The following are not acceptable as IDs on the day of the test:

Candidates must carefully check the NMAT 2022 admit card before appearing for the examination. Any discrepancies found in the admit card must be immediately reported to the concerned authority assigned by Graduation Management Admission Council (GMAC). The contact details of the official body for support have been provided below:

A sample of the NMAT 2022 admit card is attached below for reference. 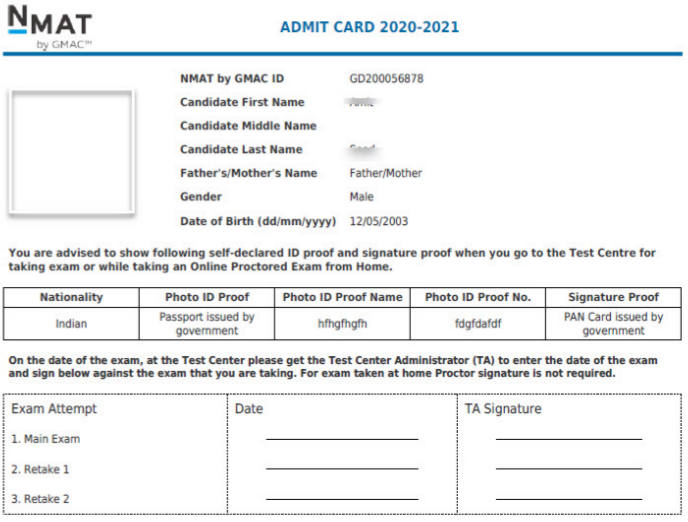 Notel: The empty fields will be filled with the candidate's information.

Want to know more about NMAT by GMAC

I want to know about the Xavier School of Human Settlements at Xavier University Bhubaneswar.

Still have questions about NMAT by GMAC Admit Card ? Ask us.

Is a photocopy of my ID proof valid along with the NMAT admit card?

No. NMAT does not consider any photocopies whether they are attested or unattested as valid ID proofs along with the NMAT Admit Card.

The information mentioned in my NMAT Admit Card is incorrect. What do I do?

If there is any discrepancy in any information mentioned on your admit card, you should immediately report it to the Graduate Management Admissions Council (GMAC). Any discrepancies will be addressed and a new admit card will be issued by GMAC.

When is the NMAT Admit Card released for candidates who wish to retake the exam?

The same Admit Card for NMAT as used by a candidate on their first attempt is valid for any retake of the exam. No separate admit card is issued for the same.

Is there any ID proof required along with the admit card of NMAT?

Yes, you will need to carry a valid ID proof such as an Aadhar Card, Pan Card, Driving License, Passport etc. along with your NMAT admit card to the exam centre.

Is it mandatory to carry the NMAT Admit Card to the exam centre?

Yes, you must carry your NMAT Admit Card to the examination centre. You will not be allowed to appear for the exam without a valid admit card for the NMAT exam.

What details are mentioned on the NMAT Admit Card?

The NMAT Admit Card contains important information about the candidate such as their name, venue, date and time of the exam, registration number, roll number etc.

From where can the NMAT Admit Card be downloaded?

Candidates can download the NMAT Admit Card from the official website of the NMAT by GMAC examination?

Is a physical copy of the NMAT Admit Card sent to the candidate?

No, candidates do not receive a physical copy of the NMAT Admit Card. They have to download a softcopy from the internet and take its printout.

Will I be notified of the released of the NMAT Admit Card?

Yes. Candidates are notified by e-mail regarding the release of the admit card for NMAT.

When is the admit card of NMAT released?

The NMAT Admit Card of a candidate is released within 24 hours after the candidate has completed the registration and payment for the exam.

NMAT by GMAC Score vs Percentile Analysis: How to Calculate NMAT Scores

CAT 2022 Score vs Percentile: How to Calculate Them?