Predict your percentile based on your SNAP performance 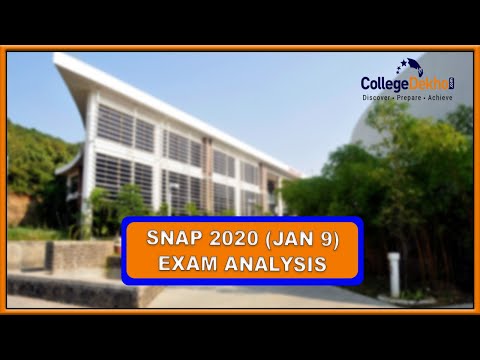 The overall difficulty level of the exam was easy. This year the exam pattern of SNAP has changed and the time limit has reduced to 60 minutes. The total number of questions has also reduced to 60 from 110 and total marks have also reduced to 60 from 150. Like every year, CollegeDekho has released an exam analysis of SNAP which you can find below. Candidates can take a look at the SNAP 2020 exam analysis which includes sectional and overall difficulty along with the marking scheme and exam pattern.

Symbiosis National Aptitude Test, also popularly known as SNAP 2020, is a national-level MBA entrance exam conducted for admission to institutes affiliated with Symbiosis International University (SIU). Every year, around 50,000 aspirants appear for SNAP 2020. SNAP is the mandatory entrance that every candidate aspiring for admission in SNAP participating colleges has to take.

SNAP 2019 exam was conducted by Symbiosis International University on December 15, 2019, in a computer-based format. As per the SNAP 2019 exam analysis, the paper was mostly on the same lines as that of 2018 in terms of difficulty level. The exam had some changes in the testing as well as scoring pattern, and had a moderate difficulty level. In the Verbal and QA & DI section, few questions were found to a bit tough.

SNAP had three sections only - General English, Quantitative Ability & Data Interpretation, and Analytical & Logical Reasoning. The questions and marks distribution for all the sections is given below. Candidates had the flexbility to attempt the questions in the sequence of their choice as moving from one section to another was allowed. Test takers were required to attempt the paper within a span of 120 minutes.

Majority of the questions in this section were vocabulary based and they were much easier in comparison to questions asked in 2018 on the same topic. Like 2018, there were only two RCs followed by a total of 8 questions. 1 RC had 3 questions while the other had 5 questions. The FIB questions were easy and required common sense. The grammar-based questions were also on the easier side.

Overall, this section was a cakewalk and an attempt of 25-26 questions in 20-25 minutes with 90% plus accuracy would be considered a good attempt.

On 2019, this section turned out to be much more time-consuming. Majority of the questions asked in this section belonged to topics like Time, Speed and Distance, Geometry and Modern Math. Calculator use was not permitted, which test takers had to resort to estimates while answering quite a few questions. Candidates had to spend a lot of time on reading questions as some of them were pretty long. Eventhough this section was not very difficult, it turned to be time-consiming.

An attempt of 18-20 question within a duration of 45 minutes with 90% accuracy would be considered ideal.

Some of the questions asked in this section were quite boring and lengthy but LR was mostly similar to 2018. Questions from Analytical reasoning dominated the section and the proportion of verbal reasoning questions was quite low. A couple of caselets were quite easy and should fetch the test takers easy marks.

A score of around 32-33 would be considered ideal for LR.

With Inputs from Career Launcher

SNAP 2018 was conducted on 16th December 2018 between 2 pm to 4 pm for all the candidates who had applied for the exam. SNAP 2018 turned out to be easier in comparison to the exams conducted in the last two years. Talking about the section-wise difficulty level, Quantitative Aptitude and General English turned out to be easy, although there were long RC passages in the English section. The section on Logical & Analytical Reasoning was also easier compared to the previous year and Verbal Reasoning was completely missing.

Now that the exam is over, you can check our in-depth analysis of SNAP 2018.

This section usually comprises of Reading Comprehension, Verbal Reasoning, and Verbal Ability. Apart from a few unusual vocabulary questions, this section turned out to be on the easier side. The special questions that were introduced in this section, which had all the aspirants worried, were actually coded questions that required candidates to identify the correct spelling or something on the same lines. There were 2 passages in RC, which turned out to be long and time-consuming. Each passage was followed by 5 questions that were quite direct and needed minimum time.

This year, the Quantitative Aptitude section had no Data Interpretation questions, which turned out to be a major surprise. This could've either been an advantage or a disadvantage, depending on how comfortable a candidate is with DI questions. The section was easy but a little time-consuming, and more inclined towards Arithmetic.

An attempt of 19 to 20 questions in this section should be considered good.

An attempt of 10-12 questions with 60-65% accuracy in about 10 minutes should be considered decent.

With inputs from Career Launcher

The Symbiosis National Aptitude (SNAP) Test was conducted on 17th December 2017 (Sunday) in 102 cities across India and the SNAP Result 2017 was announced on 28th December 2017. According to Career Launcher's official website, the SNAP 2017 examination turned out to slightly more difficult in comparison to SNAP 2016. Analytical & Logical Reasoning section was a little difficult and time-consuming. The Quant section seemed slightly tougher as well. The sections on Current Affairs & General English were more difficult.

This section with Reading Comprehension, Verbal Reasoning, and Verbal Ability did not bring any surprise elements although it turned out to be a little more difficult. The Reading Comprehension passages were not very tough and it was easy for any student to score well in the same. The difficulty level of Fill-in-the-blank (FIB) questions was moderate. Students were tested based on their Vocabulary and knowledge of Synonyms, Analogies, Antonyms, Idioms, and Phrases in this section.  There were also questions on jumbled paragraphs, which were quite doable. Within 25-30 minutes, students would have attempted close to 28-30 questions in this section and achieved a comfortable score of 22-23.

While this section turned out to be on the expected lines, it was also a little difficult. The questions on QA were individual questions and on the other hand, most Data Interpretation and Data Sufficiency questions were in sets. Majority of questions were based on Arithmetic but there were also questions based Geometry, Algebra, Pure Maths as well as Mensuration. Within 40-50 minutes, students would have easily attempted 26-28 questions accurately in this section. In this section, a good score would be anything between 22-24.

In this SNAP 2017 question paper, the GK section was a little on the tougher side and had questions based on past two years' events. For someone who had good knowledge of current affairs and is updated with the latest news from around the world, this section would not be so much of a problem. In this section, a good attempt would be around 10-12 questions within 11-13 minutes a positive score of 7-8.

The result for SNAP 2017 exam will be out on December 28, 2017. Now that the exam has been conducted, candidates would soon be able to check the Answer Key of SNAP 2017.

Note: Inputs taken from the official website of Career Launcher.

Here are the expected cutoffs of SNAP 2017.

SNAP is conducted by Symbiosis International University (SIU) for admissions to its MBA programmes offered at various Symbiosis institutes. Last year, the examination was conducted on December 18, 2016, between 1400 hours to 1600 hours across various examination centres in 32 cities in India. More than 40000 candidates appeared for the examination, which is taken by management aspirants for admissions to any of the 15 Symbiosis B-schools. The management courses offered at SIU are two-year full-time flagship MBA programmes.

SNAP was conducted in a pen and paper-based format (from 2017, SNAP is being conducted online). The objective test had 150 questions that candidates were supposed to answer. Every question was followed by 4 options, out of which had to choose one. For every incorrect answer, 25% marks out of the total marks allotted to that particular question was to be deducted. The difficulty level of SNAP 2016 was more or less like SNAP 2015.

The following link will provide you overall break-up, along with the sectional analysis of SNAP 2016.

Want to know more about SNAP

When is the SNAP 2020 answer key expected to be released?

Dear student, no information regarding when the SNAP 2020 answer key will release is available at the moment. SNAP 2020 result will be released on the 22nd of January so it is expected that the answer key for SNAP 2020 exam will be released very soon. You are requested to visit our SNAP Answer Key 2020 page at regular intervals for all the latest updates regarding the same. You can also call us at 18005729877 for any kind of admission related queries.

Can I appear for SNAP outside India?

I am B.com final year student.Which is best for me M.Com or MBA Finance ,Details

Listing down the difference between MBA & M. COM below. You can then take a decision basis your interest and skill-set.

Still have questions about SNAP Exam Analysis ? Ask us.

What is the difficulty level of SNAP?

The difficulty level of the SNAP exam is not so high. However, candidates need to study well in order to score well in the exam.

What is a good attempt in the SNAP exam to score 99 percentile exam?

The good attempt in the SNAP exam to score 99 percentile exam varies depending on the difficulty level of the exam. However, candidates will need to score at least 35 to get 99 percentile.

Which section of the SNAP exam is most difficult?

Quantitative, Data Interpretation & Data Sufficiency section of SNAP exam is considered more difficult in comparison to the other two sections since it involves calculation.

Can I check the section wise analysis of SNAP?

Yes, both the overall and section wise analysis of SNAP will be provided here. You can check the sectional analysis to know the difficulty level of each section of the SNAP exam.

What is the importance of checking the SNAP exam analysis?

The SNAP exam analysis allows the candidates to know the difficulty level of the exam. It also helps the students know what questions to expect in the exam.

When will the paper analysis of SNAP be updated?

The paper analysis of SNAP will be updated once the exam has been conducted.

By: Abhinav Chamoli
Updated On: December 02, 2021
View All Updates