NID DAT 2021 final cutoff has been released for BDes and MDes courses. The NID DAT 2022 cutoff marks is the minimum marks that the aspirant must score to be eligible for undergraduate and postgraduate admission in NID DAT 2022 participating colleges. Candidates who satisfy the cutoff can participate in the NID Mains exam. Given below are the NID Cutoff 2022 of Prelims exam and the NID Admission Selection Criteria.

The candidates are suggested to go through the following sections for important cutoff dates, previous year BDes and MDes category-wise NIT DAT cutoff scores (2022, 2020, 2019, 2018) for a better idea

NIT DAT 2022 important cut off dates are provided below in the tabular form:

The factors that affect and determine the cutoff of NID DAT 2022 are as follows:

Check out the NID DAT 2022 minimum qualifying criteria and weightage below:

The cutoff scores for B.Des and M.Des at NIDs have been listed below for NID DAT 2021. 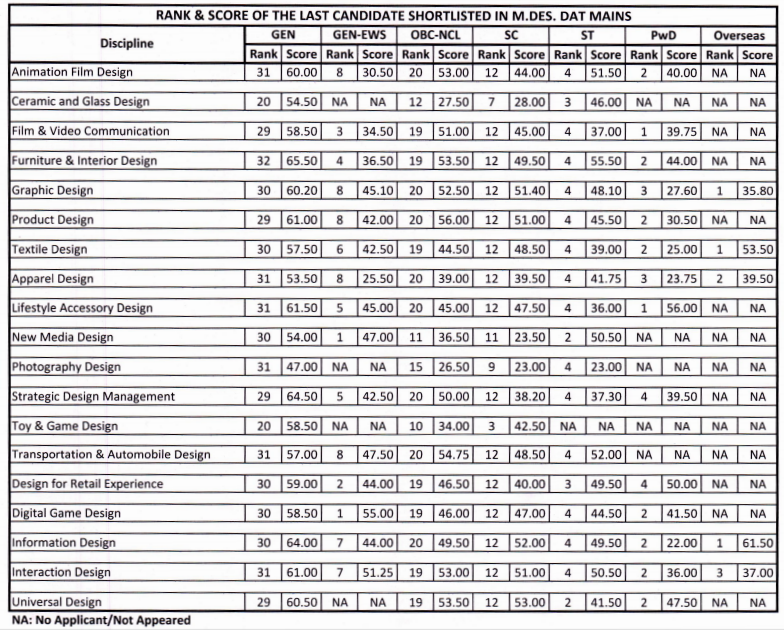 Check out the closing rank for the NID DAT 2021 (Mains) here!

The candidates will only be eligible for admission into NIT DAT 2021 participating colleges for various undergraduate and postgraduate courses if they qualify the minimum NIT DAT 2021 cutoff qualifying percentile score. The minimum cutoff score is different according to the category of the candidates. The minimum NIT DAT 2020 cutoff qualifying marks for General category students, OBC students, SC, ST, PwD students are 50, 45, 40, 40, 40 out of 100 respectively.

To give the candidates a fair idea about NIT DAT 2021 cutoff marks, the NIT DAT cutoff marks from the year 2020 are provided below:

Candidates may have a look at the 2019 cut-off of NID DAT for BDes/GDPD and MDes:

Candidates can go through the category-wise NID DAT (Prelims) cutoff for BDes/GDPD offered at NID Ahmedabad below:

Candidates can go through category-wise NID DAT (Prelims) cutoff for GDPD below:

Candidates can check out the final NID cutoff for admission in MDes courses offered at NID campuses in 2019 below:

NID Cut off 2019 for MDes Design for Retail Experience

I have completed graduation in B.com. Can I apply for M.Des Product Designing at NID Ahmedabad?

Students who have completed a Bachelor's degree of at least 4 years are eligible to sit for the NID DAT exam that offers admission to the NID Ahmedabad. Check the detailed M.Des eligibility criteria of NID DAT here. To explore more options, you can also check out the List of Top 10 Design Colleges in India and Private Colleges in India Offering Scholarship for Design Admission.

Feel free to dial the helpline number 1800-572-9877 (toll-free) or fill the Common Application Form. Our admission experts will be glad to assist you. In case of more questions, write ...

I am in class 12th and I want to do product designing. Can I apply in NID Ahmedabad?

NID Ahmedabad does provide a 4 years long B.Des Product Design, however, the application form for the academic year 2021 has expired. NID DAT Prelims exam has also concluded that is held to shortlist the deserving students. If you are still willing to pursue Product Designing, you can check out other top-notch design colleges for admissions. A few of them are listed below:

To take admission in ...

What kind of questions should one prepare for subjective part of NID DAT M.Des Interaction Design?

Here a few sample papers and questions of NID DAT M.Des exams that you can solve are provided below:

To ace the subjective section you can also go through the Best Books for NID DAT 2021 Preparation and How to Score Well in NID DAT 2021. This section judges the innovative abilities of an individual so one needs to be creative while solving the questions.

Still have questions about NID DAT Cut Off ? Ask us.

FAQs about NID DAT Cut Off

Yes, a fresh cut-off is released every year by the NID which varies depending on the difficulty level of the exam, exam pattern, the number of applicants and previous year's cut-off.

What is the next step after the release of NID DAT cut-off?

After the release of the NID DAT cut-off, a counselling process is conducted.

What happens if I do not satisfy the NID DAT cut-off?

If a candidate fails to satisfy the NID DAT cut-off, he/she cannot participate in the counselling process of NID.

How much is the weightage for the Mains exam marks while preparing the NID DAT cut-off?

How much weightage is given to the NID DAT Prelims marks while preparing the cut-off?

While preparing the NID DAT cut-off, 30% weightage is given to the Prelims.

Is the same cut-off released for M.Des and B.Des programmes in NID DAT?

No, NID cut-off is released separately for the M.Des and B.Des courses.

Yes, a category-wise NID cut-off is released for General/OBC/SC/ST categories.

Where is the NID DAT cutoff published?

NID DAT Cut off is published on CollegeDekho as well as on the official website of NID.

Who releases the cut-off of NID DAT?

NID DAT Cut off is released by National Institute of Design which is the conducting authority of the design entrance exam.

What is the purpose of NID DAT Cut off?

NID DAT Cut-off is the minimum mark that an individual must score in order to get admission in the desired course of National Institute of Design.

By: Sukriti Vajpayee
Updated On: September 09, 2021
View All Updates