The Common Law Entrance Test or CLAT is one of the most important law entrance tests which is accepted by most institutes, be it government or private law colleges. The CLAT exam is the gateway to 22 National Law Universities (NLU) situated across India. The 22 NLUs conduct the examination each year on a rotation basis. The application process for CLAT 2023 has already begun and interested candidates can fill up the form by November 13, 2022. CLAT 2023 exam is scheduled to be held on December 18, 2022. Candidates can get an idea about the CLAT Marks Vs Rank from this article. 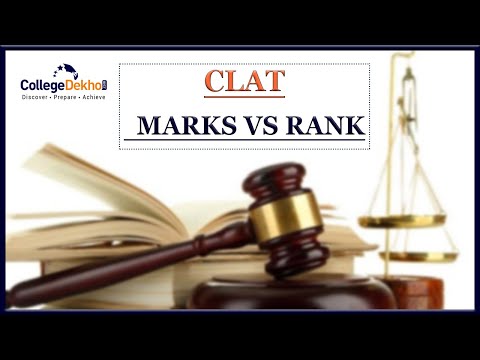 Just like JEE and NEET examinations which are conducted for engineering and medical respectively, CLAT results are also declared in the form of marks and ranks. Students often get confused between CLAT marks and rank as they fail to figure out their difference and the purpose they serve. Given below are the details regarding CLAT Marks Vs Score comparison to make things easier for law aspirants.

Following is the table which shows the relation between CLAT marks and ranks so that students can predict their ranks from the marks they get. The prediction may not be 100% accurate as the following table data is influenced by the previous year's analysis of CLAT Marks Vs Rank.

As per the analysis of the previous years, mentioned below are the expected ranks and scores of CLAT 2023.

Note: The cutoff ranks given above are of the general category without any reservation.

To check out the detailed CLAT 2022 Cut-off, visit the links mentioned below.

CLAT is considered to be one of the toughest law exams in India, and a student must score higher marks in all the sections of the exam. The following chart deals with the number of students who secured the ranks and the comparison in percentages.

Go through the table given below to understand the approximate rank you can get based on your CLAT marks to get admission to PG courses.

Stay tuned to CollegeDekho for more entrance exam-related news and updates! Write to us in our Q&A zone for any query.

Here are a few other links that might help you with law admissions 2020:

Bengal Law College, Birbhum is not a government college but a popular private college for higher studies in law. If you want to get enrolled in Bengal Law College immediately after completing class 12th, you can apply for admission to the integrated law course of BA LLB. In order to be eligible for BA LLB at BLC Birbhum, you must have a 10+2 degree from a recognised board of education and you must have received passing marks in all the exams of class 12th.

What is the fee for LLB in ADC Allahabad?

The fee for LLB at Allahabad Degree College, Allahabad is not available on the official website. We are trying to dig out the information for you. Meanwhile, you can go through the links provided below to check out the names of top colleges along with their fees.

To explore more options or to take help from our admission experts, just …