CLAT is conducted for providing admission to the NLUs located across the nation. However, few private colleges also consider it as a parameter to offer legal education. Scan through the article to find out the top private colleges accepting CLAT scores.

The CLAT exam draws the most test takers because it is the country's premier law admission exam. But many students struggle because they are unaware of the true significance of their CLAT result. While it is well known that the NLUs' 5-year integrated and 2 or year LLM programmes will both accept CLAT 2023 scores for entrance, there are numerous other private, self-funded universities that will also accept the results. This means that even if you don't get into an NLU, you still have a chance to get into one of these participating colleges if you manage to earn even a passing score on the CLAT 2023 exam. The good news is that many of these institutions, particularly the affiliate institutions, have well-known names like Amity University, Bennett University, and GGSIPU.

These universities will use the CLAT 2023 scores for admission pursuant to MOUs they have signed with the consortium. Affiliate colleges may, however, also provide admission based on other entrance tests, unlike NLUs. For instance, GITAM University administers its own entrance exam, the GITAM GAT, in addition to using CLAT scores. The Consortium website has 61 affiliates in total.

A few law institutions that haven't signed an MOU may still use CLAT 2023 scores for admission reasons, unlike the affiliate colleges that have. As we transfer between institutions, the academic standards at the colleges that fall into this group could vary the greatest. Therefore, you must conduct thorough R&D before being admitted to any of them.

The Consortium of NLUs has announced the date for CLAT 2023 which will be conducted on December 18, 2022. 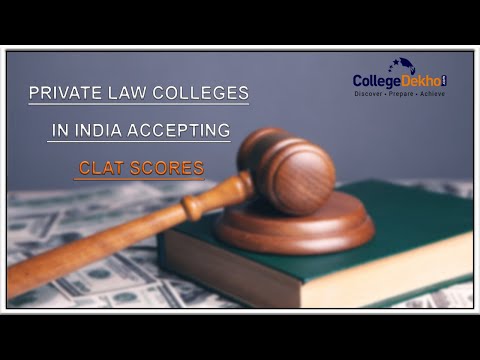 The participating colleges in the CLAT exam offer admission to the UG and PG courses of law. The official website of CLAT confirms the names of private universities and colleges that have signed an MOU with the Consortium to use the CLAT score. Scroll through the article to find the list of private colleges accepting CLAT scores along with the pros and cons of studying from private colleges as opposed to NLUs.

Check out the entire list of private colleges accepting CLAT scores in order to offer admission to UG and PG courses of Law. The programmes offered at these colleges have also been given.

Vivid NLUs that grant admission through CLAT scores are mentioned underneath along with their respective seat intake. Go through the list to understand the seat matrix of NLUs accepting CLAT scores.

Pros & Cons of Studying From Non-NLUs

Like there are two sides to every coin, similarly studying law from Non-NLUs has merits as well as demerits.

Many private law schools have made a name for themselves as the nation's top law schools and are on par with NLUs. For instance, the top NIRF 2022 rankings also include the Symbiosis School of Law. Private law schools offer better facilities, modern pedagogy, and teaching techniques that enable students to comprehend the subject by delving deeply into it. Following are a few benefits of attending private law schools:

A few of the cons of studying from a non-NLU institution are mentioned below:

Aspirants are required to weigh all the possibilities and be equipped with a thorough understanding of private law colleges accepting CLAT scores before making a firm decision. Click here to know more about the pros and cons of pursuing law from Non-NLUs and NLUs!

Below we have mentioned the names of some of the top law colleges in India which also offer placement assistance, have the most updated infrastructure and use contemporary teaching methods.

Apart from admissions in Private Colleges, Private Universities and NLUs, some public sector units or organisations also consider CLAT scores for recruitment purposes. Check out the detailed information on recruitment through CLAT score by visiting the links captured below.

Also Read:Which is Better to Pursue Law? DU or NLU?

CLAT is a centralized Law exam that every aspirant wants to crack in order to build a strong career in law. Acing the exam not only helps in providing admission to top-notch Law colleges but also gives a successful kick start to the professional world.

The main objective of an individual to score well in CLAT is that various NLUs and Private Law colleges accept CLAT scores. To prepare for the entrance exam of Law, applicants can navigate through the section-wise preparation tips mentioned below.

Stay tuned to CollegeDekho for more updates on CLAT! Fill our Common Application Form or call on the number 1800-572-9877 to get assistance from our experts regarding Law admissions.

Here are a few other links that might help you with law admissions 2020:

Bengal Law College, Birbhum is not a government college but a popular private college for higher studies in law. If you want to get enrolled in Bengal Law College immediately after completing class 12th, you can apply for admission to the integrated law course of BA LLB. In order to be eligible for BA LLB at BLC Birbhum, you must have a 10+2 degree from a recognised board of education and you must have received passing marks in all the exams of class 12th.

What is the fee for LLB in ADC Allahabad?

The fee for LLB at Allahabad Degree College, Allahabad is not available on the official website. We are trying to dig out the information for you. Meanwhile, you can go through the links provided below to check out the names of top colleges along with their fees.

To explore more options or to take help from our admission experts, just …