Get KCET Sample Papers For Free

KCET 2020 Extended Round Seat Allotment (Out) 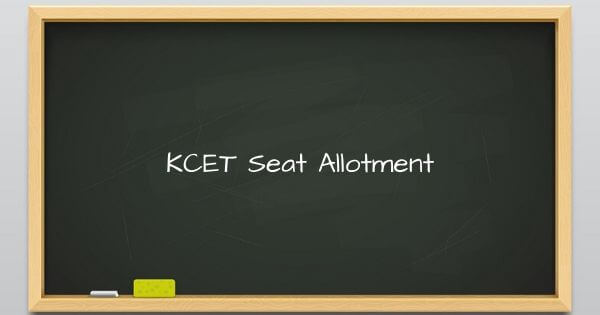 In order to know the exact details about the KCET 2020 seat allotment, candidates can check all the relevant dates in the table given below. Take a look.

First Round of KCET 2020 Seat Allotment:

Second Round of KCET 2020 Seat Allotment:

The seat allotment for the second round will be held for the unfilled/ surrendered/ cancelled/ fortified or newly added candidates. The same process of  seat allotment will be followed as was followed in the first round. Candidates will be provided with similar choices for confirmation or rejection of seats. And all those candidates who have opted for Choice 2 and 3 in the first round will also be eligible for admission.

Why Mock Allotment is conducted?

The purpose of conducting the mock allotment is to provide an indicative idea about how they will be alloted a course, college or stream based on his/her preference of options.

Choice 1: The candidate is satisfied with the seats allocated to him/her and he/she does not want to participate in the further seat allotment rounds. The willing candidate has to pay the requisite fee, download the admission order and report at the Institute/College where he/she has been allocated a seat. Finally, the candidate will be required to report back to KEA confirming the joining in the college/Institute failing to do so will lead to the cancellation of the seat assigned to him/her. Even if the candidate has completed all the steps and yet could not report to the allocated college, his/her admission will be cancelled and will not be eligible for seat allotment in the following rounds. It will also lead to the forfeiture of the fee paid by the candidate and such seats will be thrown back to the pool.

Note: In case the candidates fail to opt for any of the above-mentioned choices, the candidature of such candidates will be cancelled automatically and will not be considered for the further seat allotment rounds (If any).

By following the table given below, candidates can check the process that can be followed by the candidates for the cancellation of seats in KCET 2020:

Want to know more about KCET

I was allotted college of my choice in KCET round 1 counseling, but unfortunately could not proceed for admission, now the KCET portal showing You are stopped from admission. what to do?

After the KCET seat allotment, it is mandatory for all the students to visit the allotted institute for admission and seat confirmation. In case any candidate fails to visit the campus for admission or to confirm their seats, then his/ her seat is canceled.

You can check KCET Seat Allotment to understand the rules & regulations.

However, you need not worry as you can contact the official authorities of KCET who may help you out with the situation. You can call them on 08023460460 or email them on http://kea.kar.nic.in/ to discuss your query.

Where is the official link for KCET option entry?

The KCET online option entry has already started on November 22, 2020. You can find the link for KCET option entry on the KCET Choice Filling page. You can also check KCET Counselling 2020 and KCET Seat Allotment 2020 to learn more about the selection process.

when KCET seat allotment process will be started?

The KCET seat allotment process will be started soon. The official dates are not out yet and you are advised to stay tuned to College Dekho and the KCET official website for updates.

Meanwhile, you can also read the following articles to learn more:

Still have questions about KCET Seat Allotment ? Ask us.

Know best colleges you can get with your KCET score