Career as a Game Designer

Game designers are the developers and designers of specialized software. A career as a Game Designer includes visualising, planning and designing the computer and video games. Game designers work with a team of professionals that helps in managing budget, project timelines, and work schedules. The duty of game designers is to design levels, puzzles, characters, storylines, animation, and art. They also use computer programming languages to write codes.

Game designing includes designing the structure for the game, its setting, and its layout. A game designer has to design easily maintainable, comfortable, expandable systems and has to regularly bring innovative game designing ideas to the plate. With the globalizing and ever-evolving world, games have come across a variety of formats and platforms like PC, console, mobile, virtual, and augmented reality. Such developments in the gaming industry demand for a game designer with a broad range of creative and technical skills to imagine, plan, test, develop and deliver an idea successfully 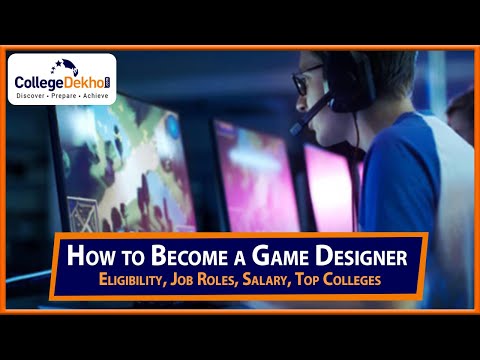 An aspirant does not require a degree or diploma to become a game designer as numerous employers give more preference to experience and game knowledge. For becoming a game designer a candidate must have a certain set of skills which he/she can acquire after completing relevant courses like B.Sc in Graphics, Animation & Gaming, B. Tech in Computer Science and Game Development, BA in Digital Filmmaking & Animation, M.Sc in Multimedia and Animation, M.Sc in Game Design and Development, Advanced Diploma in Game Art & 3D Game Content Creation, Advanced Diploma in Game Design and Development Application, Certificate in Game Art & Design etc. Enlisted below are the minimum eligibility conditions required to become a game designer.

The job roles of game designers are immense and diverse. An aspirant can either choose to become a freelancer or can work in a multinational company as well. Mentioned below are the possible job roles a game designer can go for.

Game Animator: They are the multimedia maestro. The responsibility of a game animator is to combine technology with art and imagination to create interactive animated images.

Game Audio Engineer: The role of a game audio engineer is to comprehend the essence of the game and blend dynamic audio to bring life to the world of games. They work on mixing ambient sounds with dynamic sound effects and background music of the game.

Game Designer: Duty of a game designer is to build levels, characters, puzzles, animation and art. You are expected to bring ideas to the table, create interactive narration, build prototypes and develop the mechanism of the game.

Game Programmer: Often considered as computer scientists and a brilliant software engineer, a game programmer uses codes to create the programme that smartphones, computer or video games system can read. They pick out the coding language that best suits the gaming platform.

Creative Game Director: Often the creator of the game concept, a creative game director needs to ensure that the video game project looks perfect in all the aspects. They are in charge of the overall vision of the project.

Game Artist: A game artist is responsible for all the aspects of game development that require visual art. They create 2D or 3D art form for the visual elements of the game.

Game Marketer/PR: A game marketer/PR has a pivotal role in the process. They have the duty of delivering the developer’s message and making sure that it has been taken well by the public.

QA Game Tester: Once the final submission has been done, approval is required by the QA game tester. They have to make sure that all the bugs, mistakes are getting fixed and the game is working properly.

Game System Designer: A game system designer works hand in hand with producers, programmers and other domains within the game design to develop game functions.

Responsibilities of a Game Designer

Those wondering "What do Game Designers do?" can read below:

Games are the best medium of recreation. With time, gaming industries are developing and are gaining popularity. At present, games are being wildly used to across a broad range of industries including fitness, education and healthcare. Captured below are the sectors where you can find employment Opportunities for a game designer.

Multiple companies ardently require skilled and proficient game designers across the nation. Mentioned below are the name of some popular top recruiting agencies for game designers.

Planning to choose Game Designer as your career?

The salary of Game Designers varies from profession to profession. It also depends on the individual’s abilities. The more the experience and skills, the better is the salary of game designers. Mentioned below are the pay scale or salary structure as per the profession.

Note: The above figure depends on company to company and individual to individual. They are subject to change.

There is no such entrance exam specific to the profile of the Game Designer. Although some colleges conduct entrance examination for admission to the college, candidates can also refer to the following mentioned books in order to deepen their understanding of the field.

Pros of becoming a Game Designer

Cons of becoming a Game Designer

Paths for Being Game Designer

Name the top recruiting companies for a game designer?

Do game designers and animation designers have the same job profiles?

No, game designer and animation designer are two separate job profiles. The former one is responsible for designing the storylines, characters and gameplay, while the latter one focuses on creating visual effects.

What is the difference between a game designer and a game developer?

What are the alternative career choices for a game designer?

Is coding important for a game designer?

How much does a game designer earn?

Name some skills that are required to be a game designer?

To become a game designer an aspirant must be creative, innovate, tech-savvy, adaptable, analytical and great with communication skills. Also, the person must be a good storyteller and should know how to manage time.

How to become a game designer after class 12th?

To become a game designer, a degree or a diploma is not a compulsion after class 12th. An aspirant can directly become a game designer if he/she possesses the right skills, experience and knowledge related to the field. However, pursuing undergraduate, diploma or certificate courses provide better career opportunities to the aspirant.

What degree is required to be a game designer?

There is no hard and fast rule associated with the educational qualification of a game designer. An aspirant can pursue a bachelor’s degree or a diploma in game design to enhance his/her knowledge or to widen his/her career opportunities.

What does a game designer do?

A game designer is responsible for designing stories through games. They create characters, storylines, scenarios, plots, user interfaces etc and make the concept of layout and gameplay come alive.

Submit your details to know more about Game Designer