Career as a IAS Officer 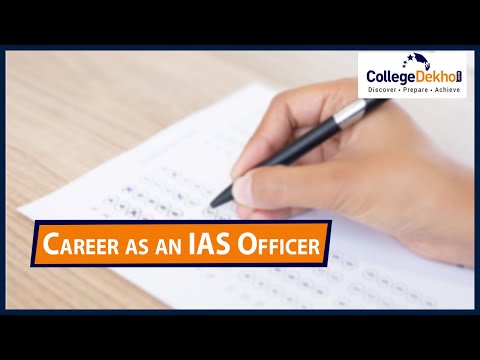 What makes it a popular career choice is the fact that along with monetary compensation, the job of an IAS officer offers several perks and privileges that no other job can offer. The role of an IAS officer is to manage various administrative matters of the government. The job of an IAS officer includes framing policies and advising the ministers on various issues, maintaining law and order, supervising the implementation of policies of State Government and Central Government, collecting revenues and function as courts in revenue matters, supervising expenditure of public funds as per norms of financial propriety and handling the daily affairs of the government, including framing and implementation of policy in consultation with the minister responsible for the department concerned.

Below are the academic qualifications required for becoming an IAS officer.

Subject Combination- Candidates can choose any stream in XII.

The job of an IAS officer is one of the most coveted jobs in India. Aspirants willing to make a career as an IAS officer can have a look the below IAS officers’ job profiles which is the hallmark of governance in India.

Cabinet Secretary: Cabinet Secretary acts as the chief coordinator of the central government. He/she acts as a link between the political system and the civil services of the country. The responsibility of a Cabinet Secretary includes monitoring and coordinating activities of various ministries and departments.

Planning to choose IAS Officer as your career?

IAS officers are some of the most well-paid government servants. The salary of an IAS officer is as per his/her post and the associated pay scale.

Given below is UPSC IAS salary after the 7th pay commission:

Students spend enormous time preparing for the UPSE CSE with an ultimate aim to become an IAS officer. However, only a few are able to live up to their dreams. To become an IAS officer, candidates should first know how to start their IAS preparation. To get started with IAS preparation, there are some of the best books and study material that one can opt to qualify the entrance exam:

Pros of becoming a IAS Officer

Cons of becoming a IAS Officer

What is the salary of an IAS officer?

What is the power of IAS officer?

What percentage is required for IAS?

No minimum percentage is mentioned anywhere in the UPSC Civil Sevices Notification. It means that the candidates who have only 33 % or the Passing percentage.

What is the qualification for IAS?

Candidates applying for IAS Exam must hold a Graduation degree in any discipline from any recognized University. Candidate must be more than 21 years of age and the upper age limit is 32 years for general candidates.

What is the work of an IAS officer?

The role of IAS officer includes policy-making and advising ministers on various issues, maintaining law and order, overseeing the implementation of policies of the Government of the State and the Central Government, collecting revenues and acts as courts in revenue matters, overseeing the expenditure of public funds.

Submit your details to know more about IAS Officer