The Department of Geography of Presidency University, Kolkata organised its annual Geography Carnival GEOFEST-2016 on March 18th, 2016.The main event held at the AJC Bose Auditorium in the University premises.

The fest was an enormous fun event with loads of excitements and experiences. The Carnival had exciting games and competitions like Poster making (Scientific & Artistic), Map Drawing Competition (Hand Drawn & Digital), Essay Writing and Photography. Sports event like the GEOSPORTS-2016 which included indoor games started from March 7th, 2016, like Carom, Chess & Badminton.

The wonderful journey of Events ran throughout the first two weeks of March with the Final Stage Event on March 18th, 2016. Among the exciting events of all types, GEOQUIZ-2016 and GEODEBATE-2016 were the most attended ones by the students.GEODEBATE-2016 had Debates of various teams on exclamatory Motions like MOTION - I: "Keeping divisions between Physical and Human Geography is futile - Integration is Best." and MOTION - II: "Geography does not involve specialisation but rather leads to Generalisation." 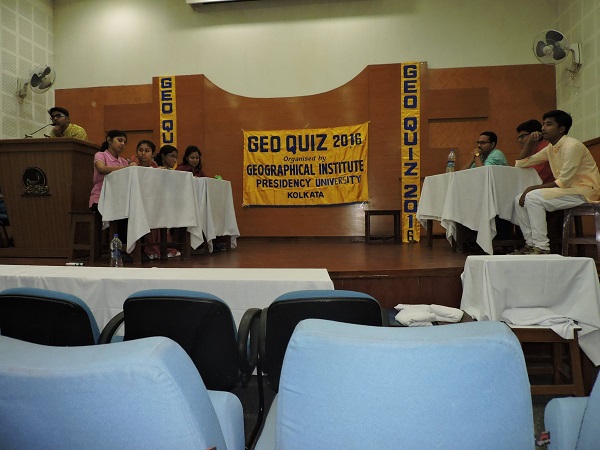 GEOQUIZ-2016 had rounds of questions on Geography, Locations, Environment ,Nature and its outcomes and many more topics. Beside all these, the poster competition of GEOFEST 2016 had various topics under two categories,Firstly, SCIENTIFIC POSTERS which included Transport Accessibility Mapping, Flooding and River Bank Erosion, Soil Loss Mapping, Population Growth Trends, Landscape Morphometry, Evolution of Contemporary Geography, Climate Change in the Tropics and secondly, ARTISTIC POSTERS which included subjects like Air Pollution, Waterlogging in Cities, Urban Sprawl, Desertification, Space Missions and Gender Inequality.Students, in huge numbers, participated in all the events of this carnival. At the end, On March 18th, 2016 the name of the winners of all the competitions were announced and they were also rewarded with appreciation certificates and exciting Prizes for their exceptional achievements.