Career as a Judge

A Judge is an elected or appointed professional who presides over the court trial and hearing in order to come up with a decision. It is often believed that a Judge does all the work in the courtroom. However, it is not true. Judges also look after certain responsibilities outside the courtroom. Their duty is to research regulations and laws, issue case decisions and opinions, supervise the work of other court staff and law clerks, meet the lawyers to discuss cases and encourage settlement, establish procedures and court rules. Some Judges also perform marriage ceremonies and issue a marriage license.

In the court, Judges are in charge of making a final verdict. They hold the topmost authority and are expected to analyse the evidence presented and deliver an unbiased verdict by listening to the hearing of the case. A Judge has to stay neutral to give a correct verdict.

An individual wishing to be a Judge must acquire at least an LLB. They are also required to be an Indian National and clear the Judicial Services Examination. The job of a Judge brings lots of respect and responsibilities along with it. A Judge of any court is considered to be honourable, impartial and of high stature.

What does a Judge do?

A Judge, also known as the 'Custodian of Constitution', is someone who's in a place of authority in courtroom proceedings. The competence and responsibility of a Judge differs across jurisdiction. A Judge is responsible for the fate of an accused person. The fundamental responsibilities of a Judge includes-

Responsibilities of a Judge

Some of the major duties or responsibilities that a Judge is responsible for are provided below.

It is extremely important for a Judge to meet the minimum requirements including academic qualifications, age criteria, skills, work experience and other criteria mentioned below.

Courses to Become a Judge

In order to become a Judge, legal knowledge of an aspirant must be sound. Provided below are the apt courses and colleges that can help an aspirant in inculcating the right set of legal skills. You can either dial our toll-free number 1800-572-9877 or fill-up the Common Application Form to talk to our admission experts and take admission or free assistance. You can also click on the links provided below to directly apply for admission.

Check out the various different types of job roles that an individual willing to be a Judge can consider.

How to become Judge of a Supreme Court in India?

The Judge of a Supreme Court has substantial power and is appointed by the President of India. Here are the qualification that a person should posess in order to become a Judge of the Supreme Court in India-

How to become Judge of a High Court in India?

The High court is the chief of the state judicial system. Here's how an individual can become a Judge of High court in India-

The Indian Constitution follows a Judicial System where job opportunities are provided to Judges across 3-tiers that are Subordinate Judiciary, the State Judiciary and the Union Judiciary. To get enrolled in any of these positions, an individual must fulfil the prescribed eligibility requirements and skills. Generally, after gaining a few years of work experience, an aspirant is promoted from Subordinate to State then to Union Judiciary.

Sessional courts, District courts and High courts of all states and districts require Judges. The Supreme Court also provides a chance to experienced, skilful and professional judges. Few of the top recruiting agencies that offer job opportunities to an aspirant are mentioned underneath.

Planning to choose Judge as your career?

Explained through the image below is the salary growth of a Judge over the years. 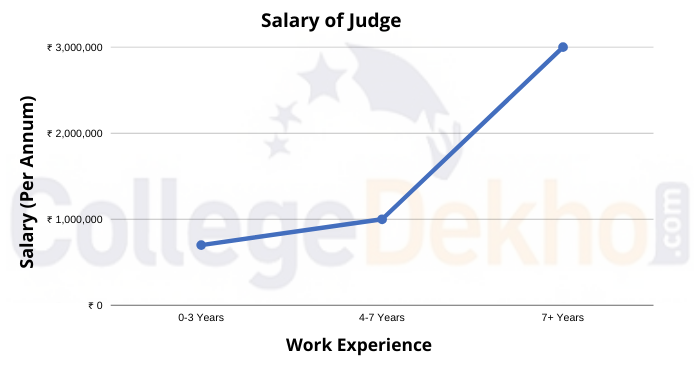 The books and study materials that play a vital role in gaining knowledge and becoming a Judge are enlisted below.

Pros of becoming a Judge

Cons of becoming a Judge

Submit your details to know more about Judge