DU First Cutoff 2021 - The Delhi University first cutoff list 2021 will be most likely be released by the first week of September. The Delhi University admission process will begin from 2nd August 2021 after the CBSE class 12 result has been announced. There has been a delay in the DU Admissions 2021 due to the second wave of COVID. The last date for the DU application form 2021 will be around 31st August 2021. The first cutoff for DU UG Admissions 2021 will be released between September 7 and 10.

Delhi University aspirants can have a look at DU Admission College Predictor 2021to get an idea of which college will they get on the basis of their class 12th score.

The admission dates related to DU First Cutoff List 2021 are as follows:

The college wise cutoff is being released. Scroll down to check.

Check out the college-wise first cutoff list for DU Admissions 2020 here. Compared to the last year the cutoff is higher.

It is important for DU aspirants to be updated with the latest updates and news regarding DU Admissions 2020. This will help them in being one step ahead and have all the information related to DU Cutoff 2020 and the admission process.

SRCC College releases its first cutoff 2020 and the cutoff for B.Com Hons. is 99.5% this year.

Delhi University has released the first cutoff list for Satyawati College as well.

Ramanujan College has released the first cutoff 2020.As expected, the first cut off list for BA Programme is set at 96 per cent

Cut Offs for many DU colleges is unlikely to decrease this year. The cut-offs may witness an increase of 0.5% to 1% across all courses. The main reason behind this is the increase in high scores in CBSE class 12. Several colleges may keep their cut off at 100% as well.

First DU Cut Off List Likely to be Out Today

According to the sources First DU Cut Off List to be out today. However, students will be apply for admission on October 12 from 10 am onwards but the entire process will take place online.

Delhi University First Cutoff 2020 is governed by various factors such as the Number of Applicants, Cutoff Trends, Best of Four Subjects, Total Number of Seats and Programmes.

DU First Cut Off 2020 likely to increase as many students scoring above 95% in CBSE exams inform DU officials.

In 2019, the University of Delhi released the DU cut off list of in eight rounds, while in 2018, the university had released 11 DU cutoff lists for DU admissions.

As the DU First Cutoff is to be released soon, find all about Delhi University (DU) B.A, B.Com, B.Sc Admission 2020 here.

According to the DU officials, the Delhi University will release a total of five DU cutoff lists and one special DU cut off list in 2020 for admissions to over 66,263 seats. The DU Cutoff List 2020 will be released for 64 Delhi University colleges.

Delhi University has confirmed that DU First Cutoff List 2020 to be released on 10th October 2020 for admission to various UG courses. 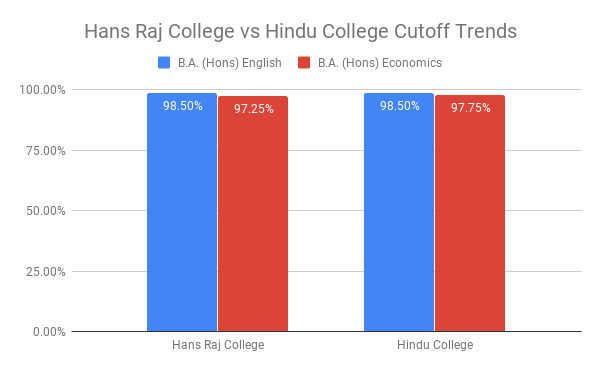 The detailed comparison of the highest cutoff for UG courses offered by Miranda House and Lady Shri Ram College is as follows:

Check out the detailed comparison of the highest cutoff for UG courses offered by Kamala Nehru College and Gargi College here:

Students who have cleared the cut-off can secure their seats at the respective colleges by paying the admission fees and getting their documents verified. Check out the list of essential documents below.

DU releases up to 5 cut-off lists on the basis of seats that will be remaining vacant after the first round of admission. Admission to 9 of the courses offered by DU will be done on the basis of the entrance test. The university will be conducting DUET as well. For more updates on DU cut-offs, visit collegedekho.

What documents do I need after DU 1st cutoff for 2020 admissions?

You will be required to carry along documents like Class X and XII mark sheets, passing certificate, photographs, category certificates, TC, Character Certificate, etc after the release of DU first cutoff for 2020 admissions.

Where will DU first cutoff for 2020 be released?

The first cutoff for Delhi University will be realsed on the official website of the University and the affiliated colleges. The coruse-wise cutoff lists for different colleges will also be published here.

When will DU conduct admissions on the basis of first cutoff?

Delhi University will conduct admissions from 12th to 14th October 2020 on the basis of the first cutoff list.

After the declaration of the DU cutoffs, are students given admission on the first come first serve basis?

No, admission is not provided on the basis of a first-come-first-serve basis after the declaration of DU cutoffs. Students are considered for admission if they meet the cut-off and eligibility as per the schedule of admission specified.

Will there be separate DU First cut off 2020 for EWS category?

No there will be no separate cutoff list for EWS Category for DU Admissions 2020.

What should I do after the declaration of DU first cut off 2020?

After the declaration of DU First Cut off 2020, the admission process begins and the most important step is document verification. Once the first cutoff is out candidates can check whether they meet the cutoff or not in the college and course of their choice.

When did Admission start in DU?

According to the reports, the First Cut-off List for Delhi University Admissions will be released on 12th October 2020. This year delay in the process was due to the ongoing COVID-19 pandemic.

9 Upvotes
0 Downvotes
Read Next
Read Next

I gave my XIIth exam from NIOS, which I, unfortunately, could not clear. I have applied for revaluation. In that scenario, can I still apply for B.A admission at Lovely Professional University, Phagwara?

Dear student, yes, you can apply for B.A admission at Lovely Professional University Phagwara while the revaluation result of your class XIIth exam is still awaited. However, LPU Phagwara will only offer you provisional admission in this case. You have to clear your Class XIIth exam and submit the marksheet at the University office for permanent admission into its B.A programme. For your convenience, you can apply for B.A admission at LPU Phagwara through our  Common Application Form. You can also speak to one of our counsellors regarding all the details related to Lovely Professional University Phagwara ...

What do the terms BA I, BA II and BA III denote in the MCM DAV College for Women, Chandigarh’s admission brochure?

Dear student, the terms BA I, BA II and BA III in the Mehr Chand Mahajan DAV College for Women Chandigarh’s admission brochure or admission application form denotes different years of the 3-year undergraduate degree programme. BA I refers to the first year of the B. A programme and similarly, BA II and BA III refers to the second and third year of the programme respectively. If you are applying for admission into the 1st semester of your favourite B. A programme, then you should click on the “BA I” link and follow the instructions available there.

How can I get admission into the B.Sc in Industrial Fish & Fishery and B.Sc Aquaculture Management & Technology programmes of Ramnagar College Midnapore?

List of Entrance Exams for Commerce Students After Class 12

How Can You Join the Big 4 After a B.Com degree?

By: Diksha Nautiyal
Updated On: July 08, 2021
View All Commerce and Banking News

Symbiosis College of Arts and Commerce Pune, Maharashtra
View All