Samia MirajUpdated On: November 04, 2022 10:00 am IST
Pascal's Law, Viscosity, Terminal Velocity, Bernoulli's Theorem, Surface Energy, And Surface Tension are the important units in the Mechanical Properties of Fluids chapter. You can check out the details of the study notes given below.
Table of Contents

Mechanical properties of the fluid are one of the most important units which will be included in the Physics subject for all of the science stream students. The students can start preparing for their physics class 12th board examination that will be conducted in the month of February 2023. Given below we have shared the detailed study notes for the subject of Physics and the unit of Mechanical properties of fluids including the study notes of Pascal's law, viscosity, terminal velocity, surface tension, surface energy, and many other important units. Check out the notes and prepare yourself accordingly:

Mechanical Properties of Fluids - Pressure Due To A Fluid Column

Formula For Pressure Due To A Fluid Column

P is the pressure at the point of reference

Pfluid is the pressure at a specific point in a fluid

ρ is the density of the fluid

g is the acceleration due to gravity (taking into consideration for earth g= 9.8 m/s2)

and h denotes the height from the point of reference.
Also Read: Mechanical Properties of Solids

According to Pascal's Law, when the external static pressure is applied to a confined fluid then the static pressure is distributed evenly throughout the liquid in all directions. The formula for Pascal Law is f is equal to pa where f is applied force, p is pressure transmitted and a is the cross-sectional area. 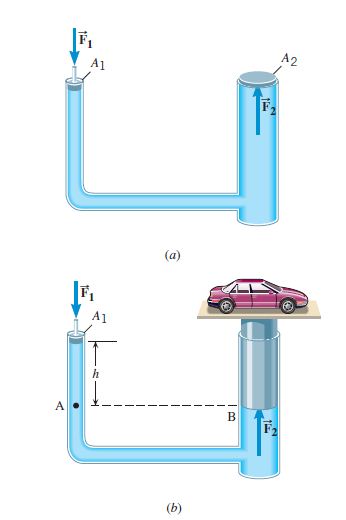 Effect of Gravity on Fluid Pressure

The force that is constantly pulling a body approaching the centroid of the earth with mass is called Gravity. Gravity affects the fluid pressure by causing the fluid body to flow throughout the direction or orientations of its own net acceleration. It also indicates the fluctuation of fluid pressure along depths.

The rate at which the fluid is resisting deformation is known as viscosity. This is also directly proportional to the thickness of the liquid. It also depends upon the temperature of the fluid pressure and the rate of deformation.

\mu= viscosity of the fluid

A= area of each plate

The mathematical equation that expresses the settling velocities of the small spherical particles in a fluid medium is called Stokes’ Law.

V_t is the terminal velocity

m is the mass of the falling object

g is the acceleration due to gravity

A is the projected area of the object

C_d is the drag coefficient

Streamline flow is the flow in which the fluid is flowing in parallel layers and there is no distortion of the layers at any given point. The velocity of each fluid particle will remain constant in streamlined flow. However, when the stream is marked by chaotic changes then it is called turbulent flow.

The speed at which the falling object reaches when the gravity and the air resistance is equal on the object then it is known as the critical velocity. It is denoted by the symbol Vc. Its unit of measurement is m/s and the dimensional formula is given by [M0L1T-1].

According to Bernoulli’s theorem, the sum of pressure energy, kinetic energy, and potential energy per unit mass of an incompressible, non-viscous fluid in a streamlined flow remains constant. 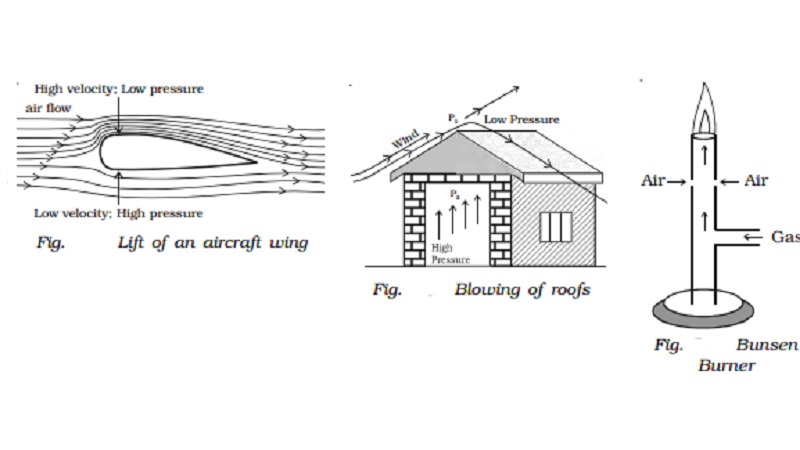 You can check out some of the simple applications in the day to day life for Bernoulli's Theorem from the pointers given below:

The wings of an airplane are designed so that the upper surface is more curved than the lower surface and the front edge is broader than the real edge. The pressure of air below is greater than above which will almost create an upthrust called the dynamic lift to the aircraft.

The rooftops were created on a slope during the olden days and this signifies one of the most important reasons which is as per Bernoulli's Theorem. During a cyclone, the roof is blown off without damaging the other parts of the house because the high wind blowing over the roof creates a low-pressure P1. The pressure under the roof P2 is greater. Therefore, this pressure difference (P2–P1) creates an upthrust and the roof is blown off.

The angle of Contact is defined as the angle subtended between the tangents drawn at the liquid surface and the solid surface inside the liquid at the point of contact.

Mechanical Properties of Fluids - Excess of Pressure Across a Curved Surface

Some of the simple applications for surface tensions are given below:

The height to which the water rises is given by the following relation.

σ is the surface tension of the liquid

ρ is the density of the liquid

g is the acceleration due to gravity

r is the radius of the tube

The students must start preparing for the Physics examination by taking into consideration the details related to the Mechanical Properties of Fluids unit given above. Check out the study notes and prepare yourself accordingly for the subject.

By: Rini Maria
Updated On: January 30, 2023
View All Education News