Out of the number of examinations conducted by the MPPSC, State Service Examination (SSE) is considered to be the most reputed examination as it inducts the candidates for "Gazetted posts." MPPSC SSE 2022 is conducted in three phases: Preliminary Exam, Mains Exam and the Interview. A candidate needs to qualify all the three phases to get into the final selection list of MPPSC SSE 2022. Every year lakhs of aspirants appear in the MPPSC SSE exam but only a very few are shortlisted in the final merit list, due to the limited number of posts as well as the high competition prevailing in today's world.

This year, MPPSC SSE 2022 Prelims examination will be conducted on June 19, 2022 across various examination centre in an offline mode, to fill the 283 vacancies. In this section, we will be discussing about the number of good attempts in MPPSC SSE 2022, expected cut off, Previous year cut off and other details on the basis of the credible data collected via deep analysis of the question paper as well as the recent year trends. Please read the complete article to get a clear view about " What can be a Good Score in MPPSC SSE Prelims 2022."

In the table given below, the expected cut off for the MPPSC SSE 2022 prelims exam has been represented:

These are just the estimated cut off as per the last year cut off and the difficulty level of the MPPSC SSE 2022 Prelims exam. The official cut off will be released on the official website mppsc.mp,gov.in after the official result declaration.

In this section, the details regarding the previous year cut off for MPPSC SSE examination has been provided. This will help the candidates analyse the trends in the MPPSC SSE cut off. Please have a look at the following table depicting the MPPSC SSE 2021 preliminary cut off.

The MPPSC releases the Cut off in a PDF format on its official website. The visuals of the MPPSC SSE 2021 official cut off are as follows: 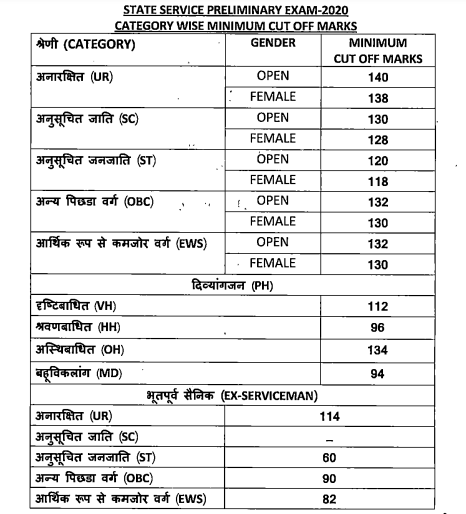 In the table given below, the cut off for the MPPSC SSE 2019 prelims exam has been represented:

In the table given below, the cut off for the MPPSC SSE 2018 prelims exam has been represented:

The preliminary Paper of MPPSC SSE 2022 paper is divided in two parts: General Studies and CSAT. The CSAT exam is qualfying in nature. One just need to secure the minimum qualifying marks to pass the CSAT exam while the merit will be decided on the basis of General Studies Paper. The GS paper consists of 100 multiple choice based questions. The Maximum Marks for this paper are 200. So, the good number of attempts can range from 72-76 for a general category candidate, with around 90% accuracy. The candidates should make a note of the fact that there is no negative marking in MPPSC SSE 2022 Prelims exam. Candidates should make a good use of this favour and attempt all the questions.

The MPPSC releases the official cut off along with the declaration of MPPSC SSE result. It uploads a PDF on its official website. The steps to check the MPPSC SSE 2022 cut off have been given below:

STEP II: Click on the advertisement option located at the top band.

STEP IV: Click on the link representing the "All Details".

STEP V: You will be redirected to a page containing all the documents uploaded by the MPPSC pertaining to SSE 2022 recruitment.

STEP VI: Click on the link representing the Cut off scores.

STEP VII: Download the PDF for MPPSC SSE 2022 cut off and save it to refer to your own score.

SAMS Odisha Plus 2 Selection Merit List 2022 for Phase 2 Releasing Today: When and where to check

By: Mahima Gupta
Updated On: September 29, 2022
View All Education News