This article contains all the important aspects of the Constitution of India that every law aspirant must be aware of.

The Constitution of India is vast and has many areas that every Indian citizen should be aware of. In fact, it is of utmost importance for every law aspirant to know the Indian Constitution extremely well as it forms the basis of their education and profession. In view of the vastness of the Constitution of India, it is understandable that students cannot possibly memorise each and every page by heart and produce citations whenever necessary. However, there are certain parts of the constitution that every individual who wishes to practise law in India and make a career in law must have deep knowledge of.

This article contains some important aspects and parts of the Constitution of India that every law aspirant must know. There are interesting facts about the constitution along with the details of some articles and sections. The students who are planning to pursue higher education in the field of law must go through this article as it will provide them with a concise knowledge of the Indian constitution. 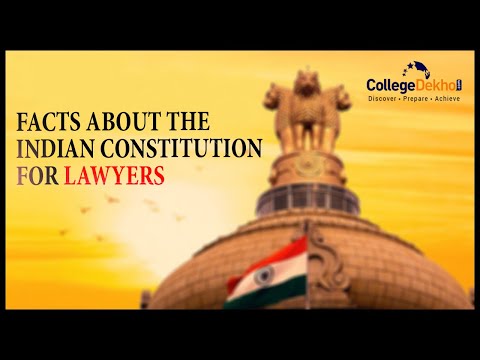 Some Interesting Facts About the Constitution of India

Important Articles of the Constitution of India

Fundamental Rights of the Constitution of India

Right to Equality: Article 14 to Article 18

Right to Freedom: Article 19 to Article 22

Right Against Exploitation: Article 23 and Article 24

Right to Freedom of Religion: Article 25 to Article 28

Also Read:Corporate Lawyer Vs Practising Lawyer - Which is Better?

Fundamental Duties: Part 4 A (Article 51A)

Originally, the Fundamental Duties comprised 10 duties but now, by the 86th Amendment Act of 2002, it contains 11 duties.

Part 13 - Article 301 to Article 307 - Trade, Commerce and Intercourse within the Territories of India

Also Read:Functions of the BCI that Every Law Aspirant Must Know

Stay tuned to CollegeDekho for more information regarding law admissions in India. Students who have any queries and doubts can write to us on our QnA Zone where their problems are solved by our experts.

By: Sukriti Vajpayee
Updated On: September 29, 2022
View All Law News