Web designer, UX designer and UI Designer are three distinct careers options that are often used interchangeably. Here is a detailed comparison to help you circle out the best one for you!

Web designer, UX designer and UI Designer are three distinct career options that are often used interchangeably. They deal with the use of multimedia and technology and this similarity often tends to confuse the students to the extent that they end up mixing the job profiles.

A web designer is an individual that aims at enhancing the aesthetics, layout and usability of a website whereas a UX designer has to work on the information architecture, usability testing, interaction design and content strategy based on the feedback from the users. The prominent difference between the two is that a web designer does not have to adopt a human-centred approach of a UX designer.

UI designers, on the other hand, follow a purely digital practice where they have to ensure that the design and functionality of the user interface are coherent, consistent and aesthetically pleasing. Though, UX designers are UI designers work hand in hand but both are different job roles. The former identifies the problem of a user and maps out a solution for it. Whereas the latter brings the map to life by making it visually appealing, inclusive and accessible.

The difference between a Web Designer and UI designer is that a web designer possesses an in-depth understanding of different programming languages. He basically works on HTML, Scripting languages such as PHP, and other web designing methods like photoshop, etc. In brief, a web designer focuses on assembling everything to make a website high-functioning. With their work,they make the website easily accessible via phone or computer. A UI professional focuses on this point of interaction and adds some value to improve the performance and make it more user-friendly.

Take a look at the article to get a detailed account of the pros and cons, expected salary, courses, top design colleges and design skills required to ace the profile of a Web designer, UX designer and UI Designer. Also, compare and contrast the differences between the three.

Anyone interested in the design industry but confused about the careers of a Web Designer, UX designer and UI designer will get a good understanding of these three professions from this piece of writing. Our discussion on the comparison between these three design professionals will help them to figure out their career paths. Whichever route one chooses, he or she should understand that the job of designing is not only about making something look presentable, it also involves understanding people, communicating with them, and bringing the best possible solutions for their requirements. Explained below are the job roles and duties of a Web Designer, UX Designer and UI Designer.

A UX designer is involved in understanding the habits, behaviours, motivations, needs and emotions of a user either through a conversation, study or through a survey. They identify issues faced by a user while working on an interface and devise a plan to solve them.

A UI designer makes sure that the user interface or the point of interaction between the user and a device is visually appealing, interactive and easy to use. He/she refers to the plan designed by a UX designer and brings it to life by adding typography, colour schemes, buttons, icons, spacing and responsive design.

A Web designer focuses on enriching the graphics, layout and links provided on the webpage or an application.

The courses that can be pursued to become a successful Web Designer, UX Designer or UI Designer are as follows.

The colleges that one can consider for building a strong career as a Web Designer, UX Designer or UI Designer are mentioned below.

Skills required to be a Web Designer, UX Designer and a UI Designer are listed in the table below. Candidates are required to take a look at them in order to decide which role suits them the best.

Also Read: Features to be Considered Before Choosing a Design School

The expected salary has an immense potential of influencing the career choice of an aspirant. Given below is the approximate salary earned by a web designer, UX designer and a UI designer.

Salary of a Web Designer

Salary of a UX Designer

A UX designer makes money as per his/her aptitude, work experience and performance. Check the salary of a UX Designer below

Salary of a UI Designer

A UI Designer extracts different salaries at starting, mid and senior level. Find the information about the money earned by a UI Designer below. 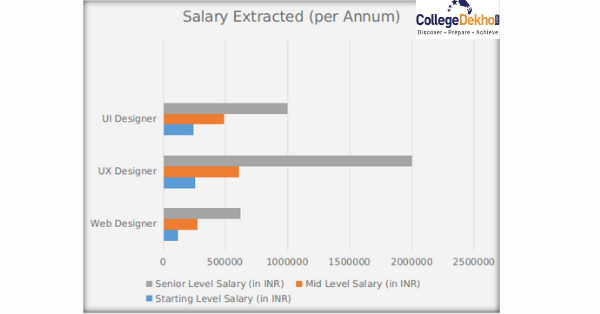 Each job comes at a different price! Enlisted below are the separate pros and cons of being a web designer, UX designer or a UI designer.

Web Designer, UX Designer and UI Designer are the most popular design profiles with immense scope. Hope this article helped you in making the right decision, if not, feel free to write down your queries and post them in the QnA portal. For admission-related concerns, either dial 1800-572-9877 (toll-free) or fill-up the Common Application Form. The experts at CollegeDekho will guide you through the entire admissions process.

About b.sc in physical edu : Can i admit now in LPU if yes than send me fee details including hostel fee whole three years

The admissions for B.Sc Physical Education course offered by Lovely Professional University has been closed for the academic session 2017-18. The registrations for the academic year 2018-19 will open soon.

Kindly fill the Common Application Form on our website. Our counsellors will get back to you, and guide you regarding the admission process.

What are the advantages of taking the CSE? : Is Computer Science education useful for jobs?

Post your degree, you will be eligible to get jobs across various sectors. some of them include:

LPU offers good placements in Biotechnology. The university has been ranked high by outside agencies also with regard to placements of our students.

By: Disha Assawa
Updated On: November 15, 2022
View All Design News